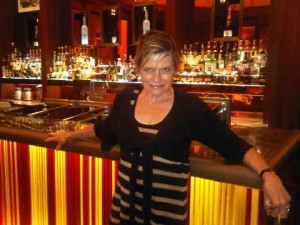 Oh what fun, when somewhat staid tradition (like an old railway hotel) turns itself into a riot of modern taste. Think of the opportunities that have already been taken in Scotland to bring Gleneagles and Turnberry – yes, both built as rural rail hotels – up to the top of the luxury hotel table.

And who actually knew that the esteemed Dorchester Collection also includes a terminus lodging place?  In 1927, the builders of what is now known as the Principe di Savoia thought they were constructing a hotel for Milan’s central station, 200 yards away.  The gal thinks this is now top of the league of elegant near-rail city hotels. 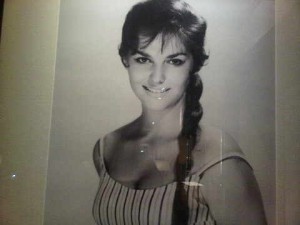 One of two Claudia Cardinale photos in 637’s bedroom

Where else can you share a bedroom with not only one Claudia Cardinale but two (has she been cloned?).  Photos of the star adorn the bedroom of 637, one of four Imperial Suites in what is, together with its conjoined Duca tower, a 401-room luxury hotel.

The bedrooms are the work of one Celeste Dell’Anna, a versatile guy who has framed large ‘fake’ oils of some of his own favourite artists.  637, for instance, had a six-foot ‘Braque’, in fact the world of Dell’Anna, and another big work that could be his take on Magritte, although the people at the Magritte museum in Brussels would think otherwise. 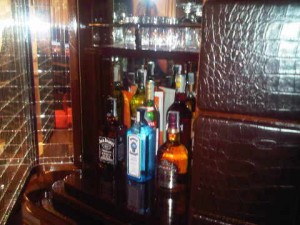 Celeste Dell’Anna has very specific tastes.  He has given 637 the feel of a four-post bedroom, without the posts. A tester, upper curtain platform, is attached to the ceiling, with decoration-only curtains hanging either side of the bedhead.

The colouring here is taupe, the signature throughout 637, with highlights of soft red. The guy loves ormulu, and a few statues here and there, and parquet flooring set in Escher-like optical illusion patterns that might give migraines to some.

His minibar cabinets are certainly over-the-top. Alligator-skin and polished veneer form the outside of six-foot cabinets that open up to all-mirrored interiors.  Yes, he loves mirrors. 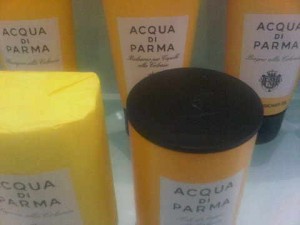 Very-milanese, for a Milan beauty

In the bathroom, a white bathtub, the shape of a Greek god’s oil vessel, is balanced on a spaceship-like plinth as though it is about to take off at any moment.

You have the feeling that if you lie in this tub, which of course has a correctly-placed wall television so you can watch the Olympics while soaking the body, you might even turn into La Cardinale.

Both washbasins have illuminated mirrors, with inset high-magnification centres, set on vertical poles – look in them, and you know you have not. 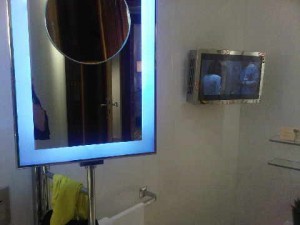 Bathroom lighting is spectacular, aided by magnifiers set in the centre of tall moveable mirrors

The Dorchester Collection worked with several designers when they redid the Principe.  Thierry Despont was given public areas, and he has turned the outer lobby into a Red Carpet special.  Through the revolving door set and you are in a Hollywood theatre.

Side walls, amazingly formed of medieval-type wire mesh brought over from the USA, are curved as if to direct you through the opening ahead, into the aura of the hotel.  Overhead is a 15-lamp chandelier.  M Despont loves chandeliers, and presumably Murano, the Venetian glassmaker, must love M Despont. 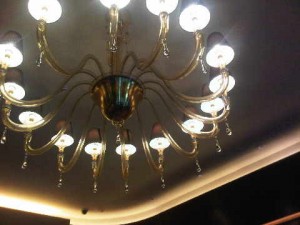 A 15-light chandelier above the hotel’s theatrical inner entrance

Take a stroll through the ground floor.  Despont has turned the rear-lobby lounge into a setting for Oscar Wilde’s Lady Windermere’s Fan, with high-backed soft green bankettes ideal for the deportment of Lady W and her late-19th century companions.

Walk along the corridor behind this lounge and you find a cornucopia of retail names.  The vitrines skillfully display goods from some you know, some you don’t, namely Kiton, Santoni, Brunello Cucinelli cashmere, Angelo Galasso – who has the new store at The Plaza in New York – Pratesi, Brioni, Coranni Campagna, Eddy Monetti. 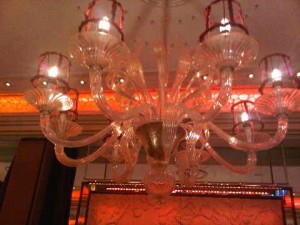 The meal starts, with Garden’s Flavours, baby vegetables on top of buffalo soft-cheese stracchino with cocoa sable dust.  As they sit on the bottom of the bowl, red onion consommé is poured over. Senora sommelière suggests pouring a glass of Ruché de Castagnole Monferrato Laccento by Mantalbero.

Someone comes in to whisper that a walk-in, someone off the street – which means no prior reservation – has just come in to book the presidential suite.  Oh so theatrical, Claudia Cardinale would have approved.