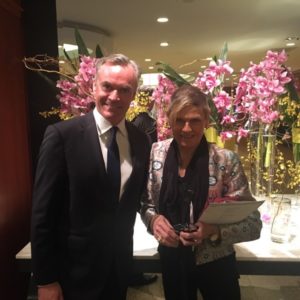 Have other luxury travellers noticed how women have shrunk?  Led by such influencers as Victoria Beckham, sky-high Louboutins and Manolos – shoes, that is, for the uninitiated – have given way to sneakers.  The only drawback is that men, or Dutch or German women, now look down at the tops of females’ heads, which is a giveaway when it comes to roots showing through, black or, even worse, grey. The pluses are that women now move faster, and do not need to hobble to the foot departments of their favourite pharmacies.

It is men, too, who have succumbed. I was thrilled to see that at Four Seasons Vancouver, which seems more and more to be anchored by its lovely restaurant Yew, that all servers, male and female, wear sneakers.  See above, and guess which shoes belong to GM Martin Sinclair, which to a server, and which to the gal. After all, now that I have done a virtual PhD in sneakers, thanks to my time at Oberoi Beach Resort Al Zorah in Ajman, I know what sneaker culture is all about. 1000 Sneakers: A Guide to the World’s Greatest Kicks, from Sport to Street, by  Mathieu Le Maux, Sports Editor of GQ France, told me about the all-time most expensive pair of shoes, namely the Nike Air Yeezy 2 Red October put on eBay for  $16,394,000 on February 16th, 2014 – and also Out of the Box: the Rise of Sneaker Culture, by Elizabeth Semmelhack, with the American Federation of Arts, the Bata Shoe Museum, and Skira Rizzoli, which alerted me to the next Sneakerness Europe conference, June 3-4, 2017, in Amsterdam, perfect for all those enviably-skyrise-high Dutch ladies.