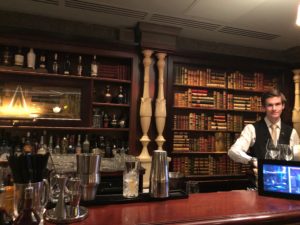 Looking like an Old Master of the Dutch School, what you see above is the luxury version of the Robuchon ‘fish and chips’ – lobster and chips – at Hôtel Metropole Monte-Carlo.  Joël Robuchon, he who had accumulated a total of 32 Michelin stars, had done all the food at this luxury hotel since 2004. By ‘all the food’ the gal means the hotel’s Joël Robuchon Monte-Carlo Restaurant, with two stars, and his one-starred Japanese place, YOSHI by Robuchon. He oversaw poolside food, and lobby snacks, and room service. For the annual Monte-Carlo Grand Prix, his team helped convert a meeting room overlooking the circuit into a Krug tasting room.

For the 2019 Monaco F1 GP, May 23-26,  he will not be around. Tragically, and much to everyone’s surprise, he died August 6th, 2018. The gal wanted to see how the hotel was managing without him. The answer, to be honest, is brilliantly. After the initial shock of losing the culinary genius, it seems the various teams are more than ever determined to keep standards up and higher. I had eaten in both Joël Robuchon Monte-Carlo Restaurant and YOSHI by Robuchon. This time, we ate in the bar, and what an absolute delight it was.

Designed by Jacques Garcia, this theatrical ground floor area flows from lobby lounge through a series of intimate rooms. Aromas and accessories are themed every season (right now, a winter looks includes stone-like paper table mats, with low-stemmed white lilies on each table).  We were surrounded by Monaco residents who may dine here three or more times a week – locals are not inclined to entertain at home.  Whereas in the two-star restaurant I might have chosen the Discovery Menu, or a Gluten-free Vegetarian menu with roast artichoke, here in the bar choices were everyone’s favourite comfort foods. Robuchon had provided, here, raw purple artichoke salad with parmesan and rocket, and two versions of fish’n chips, the usual and, at twice the price, lobster and chips, as shown above. Somehow perfect comfort food, served by model-like but genuine young ladies in black cocktail dresses, at a characterful bar surrounded by books, provided the perfect at-home evening in Monte-Carlo. Just as I found in Paris a few days ago, get the bar right and the rest of a luxury hotel’s reputation follows. And the same applies to pop-ups.  Every Summer, this hotel invites a guest-chef to the poolside Odyssey seasonal restaurant, designed by Karl Lagerfeld (now there is another genius we all miss): this July and August, the guest chef will be a Robuchon follower, Rodrigo de la Calle, whose two restaurants in Madrid, the Michelin-starred El Invernadero and Paella Power, are complemented by two, both called Puerto 20, in Beijing.