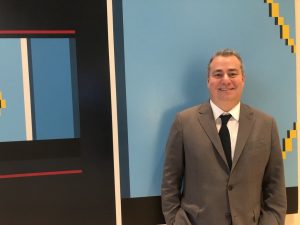 Athens Hilton has been a national treasure since Conrad Hilton declared, at its opening in 1963, that this is the finest Hilton in the world.  Since that time, the 13-floor luxury hotel has hosted heads of state galore, and the official IOC delegation for the 2004 Summer Olympics.

Now owned by TEMES, who also own Costa Navarino in Messinia, Athens Hilton is as busy as ever. What is surprising, however, is that local A-listers seem to use its Milos restaurant as their work day lunch canteen – it does have an outside entrance, which helps. The restaurant space is bright and white, and attractive.  You are greeted by displays of just-caught fish – see above.

This is comfort food for Greeks, and for today’s healthy eaters. Choose your fish, have it sashimi or grilled or atop risotto, as you like (after sashimi, I had grilled octopus with purée of Santorini fava beans).

And then there are the names. The reputation of global Greek restaurant chain Milos is such that it attracts first-timers (Milos started when its boss, Costas Spiliardis, cooked for friends as a student in Canada). Another important name here is TEMES’ boss, Achilles Constantakopoulos, who tries to be here at least once a week.  When he is eating here, it seems he knows at least half the other diners, who are quite obviously not only politicians from the nearby Parliament but leaders of industry and the arts.

This is power place, and yet the food is – simply good.  The formula is simple, and it works. Once again right food, drink and service+ambience is a luxury recipe that brings rewards.