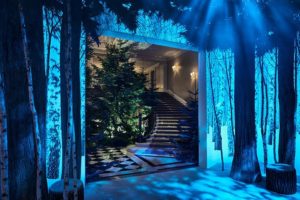 The ultimate big-name hotel when it comes to a Christmas bonanza is Claridge’s in London.  This is the luxury property that, for the last nine years, has given its lobby tree to a global brand-name, usually in the fashion world, to do as they will. This year, on November 22nd, 2017, Karl Lagerfeld will unveil his tree.  Will it be covered in toy cats, inspired by his own feline companion, Chouette, or by the kind of haute-couture items he produces for Chanel, or Fendi, or his own eponymous brand? Or will there be elements of the hotels with which he is already associated, Acqualina in Sunny Isles Beach FL, Rosewood’s Le Crillon in Paris, and Sofitel SO in Singapore?

At Claridge’s he follows Dolce & Gabbana, Albert Elbaz and the over-rated, and definitely over-paid, Christopher Bailey, now moving on from Burberry.  More of a challenge is how to do better than the 2016 extravaganza, which saw Sir Jony Ive and Marc Newson show why Apple’s designs and creativity are frankly always the best – the pair turned the entire central lobby into a winter wonderland, with a single tree, undecorated.

But other luxury hotels are getting in on the act.  Last year Claridge’s sibling, The Connaught, had a 30-ft Antony Gormley tree sculpture outside in Carlos Place.  This year, in Monte-Carlo, The Metropole opens a Chocolate Bar, fronted by the world’s most Michelin-starred chef, Joël Robuchon, seen above with colleagues. The Chocolate Bar runs from November 20th, 2017, through to March 31st, 2018.  Get there fast, chocoholics!