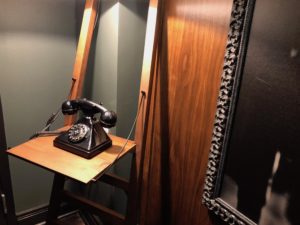 Boston is seeing a notable increase in foreign visitors who have ‘done’ other parts of the USA before.  They have been to Las Vegas, New York and Washington – OK, the last two DO have history – but now they want more.  Boston fits the bill, and it is so easy to get to, with excellent airlift and rail connections. The gal is particularly impressed by Kimpton Nine Zero, named because it is at 90 Tremont Street, literally across the road from Paul Revere’s grave, Boston Common and other parts of the Freedom Trail. 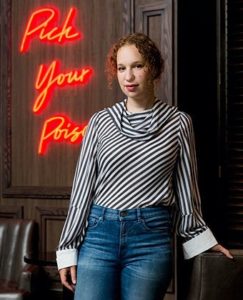 The 190-room hotel, now part of the massive IHG network, deliberately shows the past.  See the imagea bove, on one of the 18 upper floor corridors (the framed letter on the right is a note from Oliver Wendell Holmes, agreeing to a ‘slight’ alteration, which immediately begs the question about his meaning of the adjective). HBA’s designs everywhere feature satin-smooth floorboards and tabletops, Eames chairs, and see how telephones by elevators are old-fashioned retro, held on unusual modern-Scandinavian-style frames.  Visitors, and local staycationers, also appreciate not only free continental breakfast but also Kimpton’s justly-famous complimentary wines at hour-long evening networking.  Just as in old fashioned pubs and taverns where one socialised, today the tech-addicted need to meet others all the more, and Kimpton – unlike other brands which charge premiums for access to drinks-included club lounges – throws it in, for free.  One extra plus at this particular friendly-luxury hotel, incidentally, is that on the first Friday of every month there is a local historian, a polyglot, to share details of local history, and today’s sights. Coming to the present, by the way, the hotel has no traditional restaurant. But, five nights a week there are sensational cocktails in Better Sorts Social Club.  As you nibble on a Better Sorts burger, with duck fat-basted onions and Grafton Cheddar, try a The Tide is High, a Greens cocktails composed of Plantation pineapple rum, Giffard crème de banane, kale and lime.  Here’s the new mixologist, on the right.