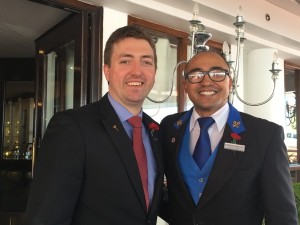 GM Michael Nel with his Concierge

Oh how valuable a great concierge is, and Masood Sadulla, head concierge of the luxury Twelve Apostles Hotel & Spa near Camps Bay, close to Cape Town, really typifies the value of his profession (he has just become a member of Clefs d’Or).  This last week the hotel has been part of the Cape Town hospitality world welcoming the annual IGLTA Global Convention. This next week, starting April 21st, 2016, top Virtuoso travel advisors and hotel partners will be in town.

I think of other great concierges, including Echo Zhu, who, when she was at The Peninsula Beijing, personally took three of us to Tianjin to pick up our cruise ship – now she is at The Peninsula Hong Kong.  I think of Simon Thomas at Oetker‘s The Lanesborough in London, who first sprang to international fame at the Royal Garden Hotel, when he started a Simon Says online news channel before most of the thinking world knew what online was (he then moved to Brown’s before being enticed by The Lanesborough‘s producer-director Geoffrey Gelardi).

Right now, of course, Masood Sadulla and his Twelve Apostles concierge team are in their element.  There is nothing a luxury hotel’s concierge likes better than having lots to do!