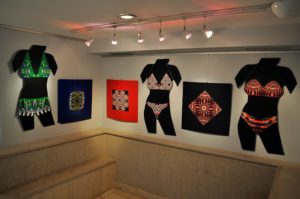 In MAK Tirana, formerly Albania’s only branded luxury hotel, Sheraton Tirana Hotel & Tower, the gal was enthralled by a display of beautiful scarves and ties that take themes from the city’s memorable buildings.  See above.

I was later able to contact Natasha Korn, Creative Director and inspiration of Triqita, the design company involved. Her Tirana architecture series, she says, began in 2005 as an exhibition of her husband’s photographs in the National Gallery of Arts in Tirana – this led to her fabric interpretations (she does several themes, as evidenced by her bikini collection to the right).   Although she is now living in England, she travels to Albania several times a year.  She also goes from time to time to Bangkok to see her son, Vladi Korn, who is a videographer for the mighty Minor conglomerate of luxury hotels and resorts.