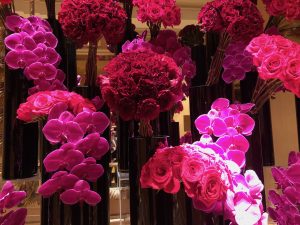 San Valentino was celebrated with gusto at Four Seasons Hotel Los Angeles at Beverly Hills. For this luxury hotel, it was an occasion, sorry THE occasion, to dress up, in a big way (it was amazing that the whole of the 16-floor building was not wrapped up and tied in a big scarlet bow). Outside the main entrance, on South Doheny, the lifesize Marilyn Monroe sculpture by J. Seward Johnson is a year-round fixture. Go inside, and immediately floral artists Jeff Leatham’s creativity comes into play.

There is a Leatham-classic, a scarlet polar bear formed of coloured glass panels, lifesize and strategically lit, of course, with a six-foot high red heart behind. Walk round to the elevators and every scarlet flower in the book must have been culled to fill the myriad – 17, in fact – of tall vases, each for one type of flower. Walk on through several interconnecting bars to the main restaurant, Culina, and look out, through all-wall windows, to a small courtyard. There stood a transparent hemispherical dome, lit with fairy lights – see the image above. There were two throne-like chairs inside. Welcome to our kissing tent, said someone, 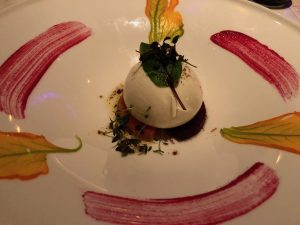 Culina was set-menu, San Valentino, that night, which is actually highly appropriate because Stalentine, patron saint of love and, separately, leprosy, was Italian, a 3rd century doctor who became a priest. He would surely have approved of this meal on 14th February. Culina chef Luca Moriconi had prepared compulsory Benvenuto, oyster with beef tartare, and Dolce, and, as if sandwiched in between, choices of Antipasti, Primi and Secondi. I had an Apulian burrata on a plate that looked as if its squash blossoms decoration had been painted, rather than stuck, on – the paired wine for this was Falanghina San Salvatore Campania 2017. Next came a hearty brown creation, cacao pappardelle with cubes of wild boar and toasted pinenuts (its wine was Chianti Classico Le Regge Toscana 2016). 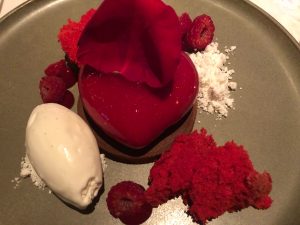 This was followed by melanzane, deliberately-charred cuts of eggplant hidden under a salad of green beans and watercress: its potable partner was Palistorte Super Tuscan 2016, Lucca. Even this non-dessert taker had to exclaim at pâtissier Christopher Ford’s dessert: a picture of red heart filled with raspberry mousse wrapped around a chocolate core, with a side scoop of crème fraîche ice cream. 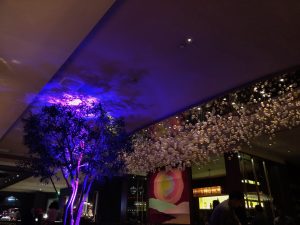 Even the connecting dining rooms were memorable

Most of the elegant females in the packed dining rooms sported, regardless of age, somethinged. Every size-zero summer frock with floribunda patterns must have been taken out of the closet for tonight. Everyone was entering into the spirt of San Valentino which, said hotel GM Michael Newcombe, was part of the hotel’s week-long Love, Art and Flowers festival, itself part of Los Angeles’ art Frieze. Frankly I thought San Valentino’s only sub-superlative was the art side. Four-foot high bold oils, blocks of orange and green hues by a Swede called Camilla Engström, did not exactly complement the San Valentino colour scheme, but then everything else was so perfect.

I tiptoed up to suite 1518 and, having eschewed night turndown, spent 20 minutes removing the thousands of fresh rose petals, all red, that had been carefully formed into a massive heart reaching right across the width of the King Size Sobel Westex linens. Oh what a memorable evening.