As a change from yet another hotel, let us cruise the Amazon, on Regent Seven Seas Mariner.  Why?  This is a cruise line for whom all-inclusive is just that, including a full range of shore excursions and, when you have reached a certain status, one pillowcase-sized bag of laundry a week for free (and it is amazing how much you can push into a pillowcase). It is also Regent’s super line staff, servers in all the restaurants, and your room (sorry, ‘suite’) team. Add to this networking with fellow passengers in a way that seldom happens at land-based resorts. For a start, everyone acknowledges everyone, staff and passengers alike, and a Block Party, on night two, when you meet your neighbours leads to new relationships.

We sailed out of Rio, not a great experience but no cruise embarkations or disembarkations are, frankly. The beginning and end of any cruise form the nadir of any cruise experience.  Mariner sailed north and then turned west for the 1,000-mile Amazon trip.  Honestly, I had not expected the river to be so brown and thick. For six days the water was like thick tea with just a little milk. Every night, we had brilliant sunsets – see above. For six days, in fear of mosquitoes (who fortunately never materialised) dining on Veranda’s terrace was banned, and the do-it-yourself launderettes were closed. 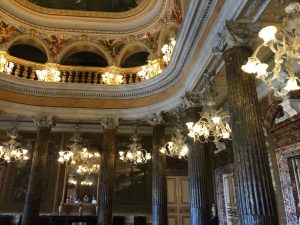 After two days’ watching distant green banks of undergrowth we had reached our goal, Manaus, 900 miles west of the Atlantic Ocean. Now home to a population of 2.1 million, it was founded in 1669 as the Fort of São José do Rio Negro (its later name is a version of the local Manaós people).  In the 19th century it was home of the world’s rubber barons, for whom no world luxury was too much. Someone had the idea of building an opera house to rival that of, say, Palais Garnier back in Paris, so, sure enough, an amazing 2,000-seater was designed and financed, with all the parts brought by sea from Europe – the 36 Murano chandeliers in the opera house’s withdrawing room had each of their eight glass shades immersed in melted butter, which set hard to form protection as the valuable artefacts were transported from the island of Murano, off Venice.

There was no air-conditioning in the second half of the 19th century so how could they keep the glorious opera house and those seated on the floor, or in the four red velvet-covered balconies, cool? Under each seat is a near-invisible air duct, leading to outside. In addition, roads immediately around were paved in noise-absorbing rubber, which meant carriages could continue apace while performances were going on, with windows open for maximum air flow.

They lived well, those rubber barons.  Because the local water was so discoloured, it is said they even sent their used bedsheets and other soiled items back to Europe, for laundering.  Times moved on, the opera house fell out of use, but fortunately it was restored 1997 and today there are once again live performances of many cultural mores – I luckily coincided with a rehearsal of a jolly good modern dance troupe.

And then, just like the Grand Old Duke of York who marched up a hill and back down again, so, having cruised all the way inland to Manaus, so we turned through 180 degrees and sailed back the way we had come, back to the Atlantic.  As I find when cycling or walking when back home, a route looks different in reverse, and so it was here. Regent Seven Seas is also thoughtful in putting on plenty of activities for days at sea – there were competitions for every onboard sport you could think of, including passengers v. officers playing Baggo, but I stuck to educational updates from an anthropological historian. Just before we reached the ocean, and the ship turned north for the Caribbean and thence to Miami, the river water lost its murky brown hue, the non-existent mosquitoes were forgotten about, the Veranda terrace and the launderettes re-opened, and we continued on our way.