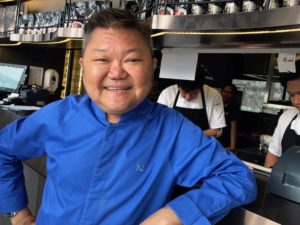 Justin Quek in his new restaurant

Once upon a time Singapore was great on mass-feeding, Chinese-style.  The Forum Hotel, on Orchard Road where the Forum mall is now, had a massive restaurant with masses of big round tables.  The hordes came, ate at lightning speed with quite a lot of the edibles ending up on tabletop or floor, and then stewards cleaned up before the next wave of diners arrived.

Singaporeans do tend to eat nonstop and the Government is so worried about diabetes and obesity that at their official functions white rice, as opposed to brown rice, is banned, as is all fried food.

Today, however, food in Singapore is world-class, and full of variety.  I was particularly interested, on this visit, to catch up with the Grand Hyatt’s Mezza9, 20 years old this September, much copied but never bettered, and still every table taken at lunch and dinner.  I loved going back to Prego, bridging Fairmont Singapore and Swissôtel Stamford.  Well done to Four Seasons Singapore for a clever semi-buffet concept.  But I also ate splendidly at such freestanding restaurants as Como at Dempsey, Christina Ong’s conversion of Dempsey Barracks into a colonial-feel relaxed dining area, serving a variety of foods (Dempsey is just the other side of the Botanic Gardens).  Another interesting concept is the ten-month old PS Cafe at One Fullerton, with decor that is top for big-window views across to Marina Bay Sands MBS, and lots of interior plants, and plenty of fashionista magazines, as shown above.  (This is the seventh Singapore restaurant of a group that started in 1999 as Projectshop, a fashion store that introduced an integral café, which grew to the extent that fashion was mothballed.)

MBS is the leader when it comes to luxury hotel dining, of course. It has over 50 restaurants, which are continually rolling over.  Justin Quek, who had a fine dining restaurant on the standing-comb-shaped structure’s 57th rooftop, has moved on.  A week ago exactly he opened Chinoiserie Modern Chinese, on MBS’s mall main floor.  Justin is such a Singapore icon that it is sure to do well – good luck Mr Q!