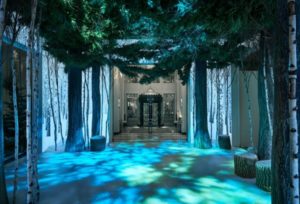 Looking through the virtual forest away from the tree

For seven years now that famous luxury hotel on London’s Brook Street, Claridge’s, has had a designer Christmas tree.  This year, however, the result, says the gal, is totally out of the box, which is not surprising since the designers are Apple’s top designer, Brit Jonathan Ive – now Sir Jony Ive – working with Australia’s top designer, Marc Newson (he who put living walls into Qantas’ First Class lounges).

Look what they have done.  Instead of decorating a tree they have produced a virtual forest wonderland, reaching 13 feet up in the lobby around. Through an old-fashioned large picture frame you look through to – an undecorated, real tree.

How often do I see something as deconstructed, inside-out as this?  I think how Colony restaurant at Ritz-Carlton Millenia has turned the buffets from the interior to the periphery of the space that used to be Greenhouse.  I think of various deconstructed dishes, be they Caesar salads or even tirimisu.  But this is totally sensational.  Well done everyone, not only the designers but Paul Jackson, the new GM of the luxury hotel who commissioned the tree.