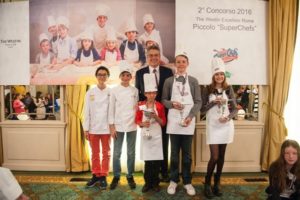 Luxury hotels often extol the virtues of inviting Global Celebrity Chefs to come and grace their kitchens – not surprisingly, some of these visitors have such a following, as a result of social media and television, that they are treated like rock stars (the gal has a feeling that sometimes the fans have never tasted the celebrities’ food and the whole reaction is a bit aspirational). I do love Park Hyatt’s ongoing global celebrations, The Masters of Food and Wine.  It started at Park Hyatt Mendoza (it was Carl Emberson, then GM of the hotel, who initiated the whole idea, which has now gone global).

And I also love the thought of Junior Master Chef, a creative event masterminded by Marc Lannoy, first when he ran Starwood’s Madrid properties and now in Rome, where he is complex GM in charge of the St Regis Grand, a hotel known for serious function-eating (see the header photo). He also runs the Westin Excelsior Rome, which was chosen for the Junior Master Chef competition. Competitors, 24 in all, were aged eight to 12 and they had to create a dish fro a surprise box.  Judges then chose six finalists, who had to create another dish from items that were chosen for them from a local market.  The winner was Maria Chiara Calise, aged ten; runner-up Filippo Carfagni and third prize winner Lavinia Luchini are both 11. Here they are, in the photo to the left, with Andrea Picchione, Junior Master Chef Italy 2015, and with Mario Palacios, Junior Master Chef Spain in 2013.

Girlahead salutes this luxury hotel for encouraging chefs of the future.  And do see the video below, IT IS TOTALLY BRILLIANT.