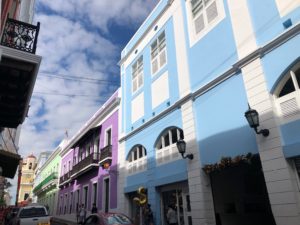 Walking around San Juan’s Old Town reveals many similarities to Havana – though here, in the capital of Puerto Rico, there are some side streets that are side-by-side designer boutiques.  Here, there is only one significant centre-city hotel. El Convento, as its name implies, was originally a Carmelite convent, and the owners have not drastically changed its look. The main doorway opens to take you through to cloisters around a courtyard, now mostly shaded by umbrellas, a sensible move as this is the main day-long restaurant and bar. There is a Nispero medlar tree in the courtyard, by the way, which is said to be 300 years old. 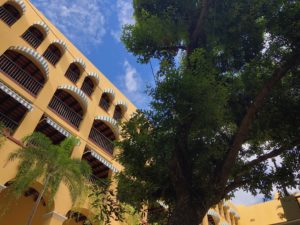 Looking up at El Convento hotel

El Convento operated as a convent 1651 through to 1903, and in 1959 it was converted by Robert Woolworth, heir to that family’s fortunes.  Today, the 58-room hotel is the oldest member of Historic Hotels of America, and it has some lovely touches, including the main doormat emblazoned with the fact that it is also part of Small Luxury Hotels of the World. Take the Gloria Vanderbilt Suite for most style, and enjoy lazy hours sitting under awnings in the open courtyard that is the all-day La bar-restaurant – there is also, Kimpton-style, night wine and cheese tasting.

As I left, to go back to the Good Ship Voyager (yes, I am back on Regent Seven Seas) I thought poor, and plucky, Puerto Rico. Seemingly abandoned by the great USA since Hurricane Maria in September 2017, it now needs all the help it can get.