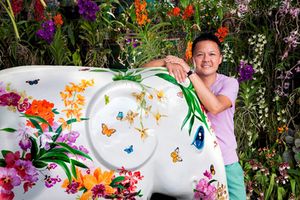 Simply Sunday. Analysts say that one of the reasons Brazil was so devastated by Germany this week – World Cup, in case you have been on Mars – is that that nation never does anything until the last minute and just hopes everything will be all right.  Germany, by contrast, plans minutely.  OK, says the gal. Look at what is coming up.

My dear friend Melanie Brandman took part in Thailand’s annual charity King’s Club Elephant Polo Tournament a few years ago.  It is now such a large event, with add-on happenings, that it is moving to Bangkok. Note the date, August 27-31, 2014. There will be 50 teams, including one entered by Peninsula Hotels, taking part, at Siam Polo Park, in the VR Sports Club, near the main Bangkok airport. As well as the 50 riders taking part in the tournament, there will be many related events, with television stars and personalities, and professional polo players. The 50 elephants have full medical checks throughout the event, and they are exceptionally well housed and fed (main sponsor is Anantara, whose Chairman Bill Heinecke has long been a supporter of rescuing abandoned elephants, some of whom can be seen, and tended and ridden, at Anantara Golden Triangle, a gorgeous all-inclusive resort in northern Thailand).

One special this year, by the way, will be the introduction of ‘fake’ elephants, individually painted as shown.  What a photo opportunity!