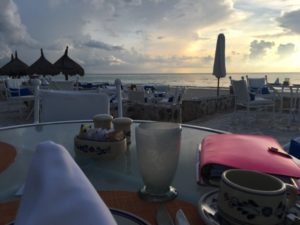 Start to a day of ILTM Americas

Right, the annual ILTM Americas, THE gathering place for top luxury hotels and those who want to do business with them, both in and out of Latin America, has been and gone, for another year.  But the gal knows that already all the hotels involved in the event have been stock-taking, thinking how they can do even better next year.

The 600 delegates have memories of the event, and immediately afterwards (Hilton’s luxury champion Samuel Chamberlain was not the only one to head on over, after ILTM, to Esencia, which was completely booked solid last night, Saturday October 1st).  This coming week, all the three Mayakoba hotels (Banyan Tree, Fairmont and Rosewood) will be working out how they can show even more luxury at ILTM Americas 2017.  Fairmont Mayakoba, which has the convention centre that hosts the business side, makes notes from this year, and, two months before, starts detailed planning for ILTM Americas 2017. Everyone seems to need transport buggies at the same time, for instance.

All hotels, not only at Mayakoba but also in the area, pick up a lot of business from ILTM. Think of the logistics, with separate villas and casitas, and right in the middle of the raining season. At Fairmont Mayakoba housekeeping trolleys (pale green, with little leaves painted on them, to avoid looking too obvious) have clear plastic covers.  Just north of the Mayakoba trio, Belmond Maroma housekeepers use wheelbarrows, fabric-lined, of course – perhaps they just hope it will not rain?  And all the time, those lucky people who realise how essential it is to be at ILTM Americas can start the day, on the beach or wherever, and saved the challenges of running these luxury hotels at this high-octane time.