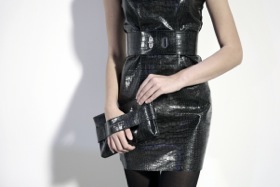 The gal has often wondered why luxury hotels do not take the gear their teams wear more seriously. The best bar outfits ever were those at Scarfe’s in Rosewood London: the outside operator had hired actors and nightclub personnel and told them to wear their own clothes.  OK, think of the stereotype and the garments they might choose, and exaggerate several times, and you have got the picture.  Yes, one of them could easily have been wearing the garment in the picture.

In fact this is one of the current consumer collection from Charles & Ron, Malta’s top designers, Charles Borg and Dutch-born Ron van Maarschalkerweerd.  They have a boutique in the lobby of The Corinthia Palace Hotel & Spa in San Anton, Malta – where breakfast servers wear absolutely gorgeous bright grass green waistcoats with yellow ties, but these are not designed by them.  I do like anything black. At London Hilton Gatwick, the armies of housekeeping staff, forever turning rooms over at this busy airport hotel, wear black chinos and black overshirts, practical and much more flattering than the tweenie dresses with frilly aprons that some luxury hotels demand their maids wear (sometimes changing from colour, to black, day to night).

Frills, by the way, really do not work on professional gear.  The only thing I would change about lovely Wynn Las Vegas is the frills around the knee-length hems of girls’ cream frocks (though I do love their corsages, which also feature, most flatteringly, on front desk dresses at Oetker Collection‘s Le Bristol in Paris). When The Savoy, A Fairmont Hotel, reopened on 10/10/10, all 500 team members were dressed by Simone Plitzko, with three changes for each – she turned to two other London names for help, to Liberty’s for silk scarves and ties, and to the Royal Warrant-holding Gieves & Hawkes for suits for managers. But if you really want to see who understands luxury hotel fashions the most, check the Milan company, Maurel.  Their golden book is the who’s who of the best, in alphabetical order, Le Cheval Blanc Courchevel 1850, Four Seasons (including Milan), most Kempinskis in the portfolio, Peninsula Paris, Villa d’Este…. they were even called in to save Armani Hotel Milan after, apparently, it was found Giorgio‘s own garments would not stand the war and tear that hotel life demands.  Perhaps couture designers do not do practicality.  I must ask Sybaritic Single, who is decidedly Dior.

And now, dear reader, I am off to visit the home of Charles&Ron, and its luxury hotels….