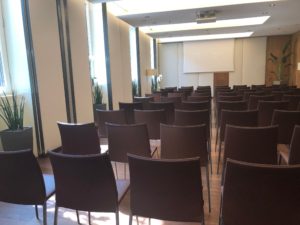 The gal was blown away by the meeting facilities at the luxury Mandarin Oriental Milan.  The spaces were not large – the room on the left is set up for 70 but apparently it can easily accommodate 90.  The other rooms were more intimate but all were really attractive, with marvellous Italian oak and masses of living greenery and fresh flowers. All had outside windows, with grills dating back to the 19th century (the 104-room hotel, owned by Grupo Statuto, was converted from four old houses). Designer Antonio Citterio has also woven his magic, here.  All the meeting rooms lead off a corridor that looks like an extended picture frame.

I honestly never thought I would be raving about MEETING ROOMS. Those are honestly not my thing. But these are different. They are also complemented by most attractive food set-ups, on high tables, at different heights but most of them geared to Milan’s basketball players.  Everyone, however, any height and on meeting time or not, can enjoy the stunning flowers outside the meeting rooms and in the hotel’s lobby. The picture above shows one such display, which acts as yet another picture frame, this time for my new Catalan friend, Meritxell Pujadas.