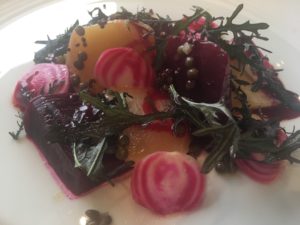 In days gone past many luxury hotels had restaurants on the top floor – the gal remembers insufferably un-fun Grills, with full table-side flambée and more bored waiters than diners.  Then rooftop restaurants went out of fashion, partly because of security (how could one monitor who was going up that top floor?).

Now it has become accepted that if there is a view there is always a way round that security issue. Think of spectacular rooftop dining, say, at The Dorchester Collection’s The Eden in Rome, or across the river at Michelin three-star La Pergola, atop Waldorf Astoria Cavalieri.  Also Waldorf Astoria, how about the oh-so-successful rooftop Vongerichten bar and casual dining on the top of the new Waldorf Astoria Beverly Hills.  In Hong Kong there is spectacular high-up dining at Ritz-Carlton, on the mainland, and on Hong Kong Island at Shangri-La’s Petrus, and at Mandarin Oriental’s Man Wah, for Chinese, and Pierre Gagnaire, for French.  That is where I lunched, and as always with this French charmer’s food, I was captivated. To start, there was skate wing in jelly, with pig ears, leek, capers, pearl onions, and parsley mayonnaise – see above. To continue, there came beetroot coated in seaweed butter, Le Puy green lentils, and fresh goat cheese.  Sometimes, but not too often, best of French is perfect for a travelling health fanatic.