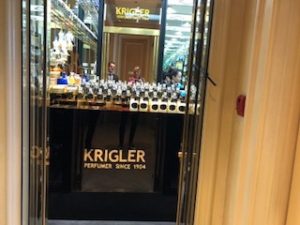 Lobbies of luxury hotels were built with plenty of small rooms, for offices, for doormen to store things and bellmen to store bags and so on.  The problem, says the gal, that none of these cubby-hole rooms brought money in.  And, as we all know, owners like return on investment on every square inch, or at least every square foot, of their buildings.

I have recently seen two exciting conversions of former lobby ‘little rooms’.  Both are in California.  Above is the JCB Collection tasting room at Ritz-Carlton San Francisco.  By working with Jean-Claude Boiset, known as JCB,, the hotel’s owners, Carey Watermark, make money, I am sure a lot, from such a partnership (JCB has has 24 wineries in his native France, plus Canada and the USA, and it must help, also, that he is married to Gina Gallo).

Similarly, at Four Seasons Hotel Los Angeles at Beverly Hills, the hotel’s owner, Robert Cohen, must be thrilled with the return on turning a tiny room in the front office into a perfumerie. New Yorker Ben Krigler, 37, is the fifth generation of this fragrance company – only 3,000 bottles of each perfume is released, but he also produces 15 different fragrance candles and six scented soaps.

Such use of space not only brings money into owners’ pockets but provides differentiators to the guests of luxury hotels. Win-win.