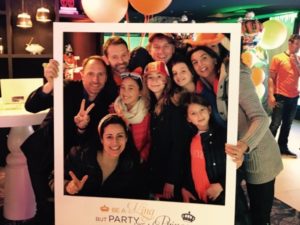 Amsterdam’s most-fun luxury lifestyle hotel, Andaz Amsterdam, opened in 2012 on historic Prinsengracht and, says the gal, it made an impact from its first day. Designer Marcel Wanders is part owner of the 122-room property, and he has done unique features. Elevator cabins, for instance, appear to be surrounded by walls of books, but press a button to go up and you rise up, out of that literary world, to look through the cabin’s glass wall at a wonderland of hanging light installations. Back at ground level, some walls have fascinating videos, like the blue gymnast, above.

There are also continual bursts of fun. To celebrate the annual Konigsdag, King’s Day, GM Toni Hinterstoisser throws a party, for locals and guest. April 27th is the birthday of King Willem-Alexander, and this continues a tradition that goes back to 1885. Why did it start? King William III was an unpopular monarch, and to try to promote national feeling it was proposed by the editor of the newspaper Utrechts Provinciaal en Stedelijk Dagblad, one J.W.R. Gerlach, that a celebration should be planned for the fifth birthday of his daughter, Princess Wilhelmina.  Prinsessedag was launched, which has variously been Koninginnedag, Queen’s Day, or Konigsdag.

As I saw in Rio a few days ago, everyone, everywhere, likes a chance to hold a party, and the Dutch are no exception. There are orange flags, and orange gear, and celebrations (and flea markets). It is the same in Aruba, Curacao and Sint Maarten. Back home in the Netherlands, Andaz Amsterdam, which is riot of colour year-round with its videos, and Blue Spoon restaurant and blue delivery bike, and red corridors and outsize chairs, goes orange for the occasion. Luxury hotels should, and do, have fun.