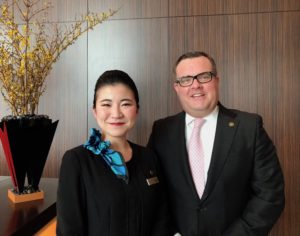 It is the same the world over. Every highly-discerning traveller expects a product that is even better than the last visit, be it in perfect tempura, as above, or bed-linens that make you feel like a prince or princess. (Sheets used to be 400-count, now nothing under 600 will do and some luxury hotels even go up to the maximum that is technically possible, 1,300-count.) So owners spend more on upgrades and operators tax their brains harder and harder – which of course is great for the adrenalin – in search for innovation and perfection.

But the main challenge today, globally, is getting staff.  Hospitality is just not sexy or appealing enough and teens’ parents would rather their sons and daughters became bankers than servers. The oh-so-popular 290-room Conrad Tokyo saw 90% average occupancy in 2017, with about 40% repeats.  Scottish GM Neil McInnes  oozes passion and enthusiasm for the hotel world – as does his newly-promoted Japanese Guest Relations Manager, Yuka Kuramasu.  She had, when small, wanted to be a kindergarten teacher, but, freshly out of college, she joined the hotel as a graduate trainee in 2013, working part-time in China Blue restaurant.  She was hooked.  And, as she said, she loves interacting with people and making them happy, traits that she shares with her GM.  So how can we all get the message out to attract even more people of the calibre of Kuramasu-san and McInnes-san?