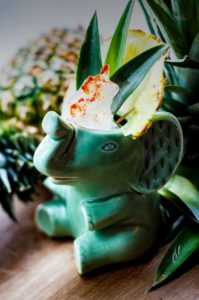 The Langham London’s Artesian Bar has been a global hit since it opened in January 2007 – it is named for a 360-foot well underneath the hotel.  Designed by David Collins, the tall room has full-height white broderie anglaise curtains, and colours overall are palest grey-purple, with grey leather flooring and purple leather seats.  Overhead hang three giant Chinoiserie chandeliers, one gold, one silver, one bronze. From the start Artesian has offered morning muffin tastings, and day-long cupcakes, and, of course, alcoholic beverages.

Bars are led by their head personnel and Alex Kratena and Simone Caporale, an inventive duo, made this the high-profile drinking venue, even getting to the top of the best bars in the world awards, run by Hamish Smith. (He claims that his hundreds of voters come 34% from Europe, 23% from North America, 20% from Asia, 11% from Latin America, seven percent from Australasia and five percent from Africa and the Middle East and yes, that does add up to 100!) His current best bar in the world in The Dead Rabbit in New York. Artesian is top bar worldwide in Adrienne Stillman’s just published Where Bartenders Drink, published by Phaidon.

But luxury hotels are, despite the brand hype of the very word ‘bar’, still bigger than those who run them and Artesian got prime billing on the back page of the International New York Times this last Friday, March 24th, 2017, and its cocktails – as shown at the top of this story – look, well, just amazing.  Alex Kratena, meanwhile, is this very weekend guest-barring in Singapore, at the city-state’s first-ever Singapore Cocktail Festival, which runs March 16-21, 2017.  Among the impressive events taking place across town is the showcasing of Ruby the Elephant cocktail in Marina Bay Sands’ Bread Street Kitchen.Ruby the Elephant is made with Bacardi 8 Year Old Rum, Bentiana, Blood Orange Cointreau, sugar cane and fresh coconut water – and Ceylon Arrack, which gives a percentage of all sales to maintaining an elephant orphanage in Sri Lanka. The gal supports every such conservation initiative, and she is also totally in favour of such luxury hotels as The Langham in London and Marina Bay Sands in Singapore making themselves even more fun places to be.