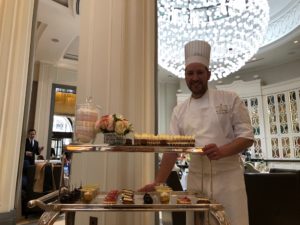 Richard Brendon is becoming king of the UK’s contemporary rating-and-drinking vessels. It is he who has designed the gorgeous fluted glassware in the stunning new American Bar at Gleneagles.  After only five years in business his followers also include such other luxury brands as Four Seasons and Rosewood, and Harrods and Lane Crawford. Based in his home city, London, his business has grown from one simple idea. While at design school (and simultaneously working in a pub) he realised that Portobello Market and other bric-brac collections often had gorgeous, but lonely, antique saucers, with no cups.  Why not produce new cups with mirrored exteriors, to show off the saucers to full advantage?  Well, one other luxury brand that loves Richard Brendon is Corinthia Hotel London.

See the Richard Brendon bone china above. It is part of the hotel’s new afternoon tea, launched April 11th, 2018. Instead of the increasingly-common curates-stand presentation, with all edibles brought at once on a tiered stand, here the hotel’s  50-seat central Crystal Moon Lounge is theatre for a progressive experience. First you are brought plates with five different finger sandwiches, including egg mayo truffle and watercress on spinach bread. Next, individual bento boxes hold one each, a plain and sultana scone, both warm: these come with Cornish clotted cream and rhubarb and tonka bean jam. The final stage is when a giant three-tier antique silver trolley, at least 125 years old, is wheeled up for you to choose four of Pastry Chef Loic Carbonnet’s bite-sized cakes (you can also add canelés, lemon drizzle cake and pink or white marshmallows).  A selection of teas, or Corinthia hot chocolate, with marshmallows, whipped cream and chocolate splinters, is included – pay extra for Champagne, Brut or Rosé, both Laurent-Perrier.  Pay nothing to listen to a pianist playing a just-purchased grand, Steinway of course.  Nothing but the best for this luxury hotel.  And its GM, Thomas Kochs.