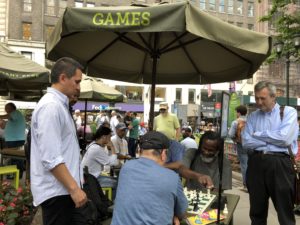 It is all too easy to luxuriate in the confines of a luxury hotel and never go out but then, says the gal, you miss so much.

In Rio I emerged from Belmond Copacabana Palace and walked along avenida Atlantica past an open-air market.  Two dummies, as above, had no function but they caught my eye and provided a memory. I have since often wondered if they could in any way be attributed to Jean-Michel Basquiat, 1960-1988, in which case they would be worth millions (on 18th May 2017, his 1982 painting of a skull set an all-time record for an American artist at auction, realising $110.5 million at Sotheby’s).

Similarly another memory is walking north a few blocks from the Langham New York.  My destination was Bryant Park, the former Reservoir Square that was renamed in 1884 for William Cullen Bryant, Editor of the New York Evening Post and a renowned abolitionist. Today,  in the height of summer, the Park becomes a hive of activity, with a traditional beautifully decorated turning-round carousel for toddlers, and miniature putting for their elder siblings and, for adults, games galore, from backgammon and chess through to cards galore. A few feet away a couple of hundred besuited guys and one or two token women, all at a conference, had spilled out on to a terrace for cold beers and networking.  I walked on through the Park, and headed back south down Fifth Avenue. Six minutes later I was once again cocooned in the luxury hotel that I was temporarily calling home, but the Park experience had added to the overall appreciation of staying there.