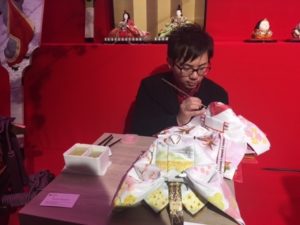 Once, in Japan, the gal coincided with rake day. No, it was not honouring louche lay-abouts who have nothing but ill-intent in mind.  It was a celebration of the implements that turn the hay, scatter gravel, anything, in fact, that needs spreading. They have celebrations for everything in Japan, and the best-known celebration is sakura, cherry blossom. This is so important that the national meteorlogical office puts out its prediction: ‘the first blossoms in Tokyo will appear March 22nd, 2017, four days earlier than the average year, and one day later than last year. If you’re planning a trip to the capital to view the blossoms, the peak period, according to this initial forecast, will be March 30th, with full bloom expected on this date’. Luxury hotels are part of the act, says the gal.

The nation celebrates far ahead, and continues after the blossom has fallen off. The Peninsula Tokyo will be taking sakura to Paris as part of its promote-Tokyo week there, starting April 4th, 2017.  Back home they are sakura-ing everything.  You will be able to drink sakura latte, or sakura margaritas, eat sakura popcorn and sweet buns, and have a 3.5-hour sakura spa treatment. (At any time, by the way, celebrate the finesse of what can be done in Japan through the most magnificent illustrated food book, Soul of Japanese Cuisine, which taught me, for instance, the order of kaiseki presentation).

You do honestly learn something every day, or every hour, in Japan. At the lovely ILTM party at Andaz Tokyo Toranomon Hills, GM Ross Cooper not only had early displays of cherry blossom, as above, but he had laid on skilled craftsmen to show how they so delicate practise their arts – and what is more those craftsmen were young.  Yes, Japan, and its many luxury hotels, are unique in so many ways.