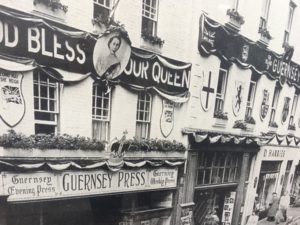 Jubilation on the island

Guernsey is such an idyllic island, 25 square miles, a population of under 88,000 and the world’s best-value bus service, namely one UK pound for as far as you want to go (it also has one of the UK’s most memorable and friendly luxury hotels, but that is another story – see tomorrow’s www.girlahead.com).

But, says the gal, is it right for any destination to live off its past.  In August 1846 Queen Victoria and her husband Prince Albert paid a brief visit to the island, apparently the first ever by a reigning monarch.  The islanders were so honoured that a granite stone was laid where she stepped ashore in St Peter Port Harbour.  The good local citizens immediately commissioned a tower to commemorate the visit, and appointed William Colling to do a design. The first stone was laid by the Governor, at which point the entire town, and ships in the harbour, were profused decorated with flags. Rather alarming residents of the Town Hospital helped with the construction.

Guernsey still loves monarchy, as shown by the garden signage at the top of the page (note the date is 2014). And the island’s leading hotel is forever committed to continuing tradition, as well as keeping up to date, as we will see – tomorrow.