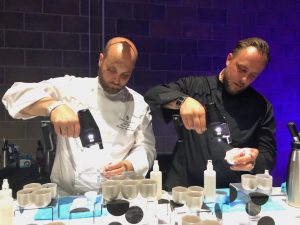 Well, all luxury hotels need to keep ahead of the pack.  Four Seasons has been renowned for being the leader when it comes to service and now it seems to be going all-out on throwing the kind of parties that attract influencers and younger-generation A-listers.  Not only has Four Seasons turned entertainment upside down but the company has upended the Pop-Up craze, too. ITS functions are Pop-Downs.

The most recent was at Hawley Wharf in London’s trendy Camden, immediately to the north-east of Regent’s Park, in a two-floor basement box, with concrete on all six facets though the floor, the size of a small football field (the floor was covered with sand for that night, Thursday 3 October 2019).  Give your credentials at street level to one of many James Bond characters, all in black and white.  Of the 650 invited guests, 99% were in some kind of black.  The most visible of the 120 workers-servers-whatevers were either in culinary whites, or shortest white party frocks sporting single white angels’ wings, or in white frocks with big black polka dots.

No speeches, or none that I heard. People were too busy quaffing the Dom Pérignon that flowed like water, or trying margaritas topped with just-spun candy floss. Others went for Cloudy Bay and its ilk, with the occasional Voss chaser. Fifteen Four Seasons food and drink specialists came from wherever, each with about five assistants, to compose, say, avocado wraps (Four Seasons George V Paris) or, such heaven, one-bite pork gougères with truffle, and toppings of bits of real gold leaf that Napa Valley’s chef Erik Anderson oh so carefully put on with tiny tweezers. Florence’s Vito Mollica of course made his signature risotto, here in public, and Four Seasons Hampshire produced one-bite chocolate s’morres topped with marshmallow foam and smoke bubbles made with flavour busters – see a video, below.

Social media were already being worked overtime and then electronic music aces Disclosure took to the tables, and the atmosphere erupted.  Mid-20s brothers Guy and Howard Lawrence – above – moved as a synchronised swimming pair as the music crescendoed, while two feet below them on the main floor hundreds, all holding aloft devices set to ‘video’, went crazy, simultaneously. The main organiser, who had done it all from Toronto, said THIS is the way to market to tomorrow’s leaders.  And the DP never ran out. NOW SEE A VIDEO