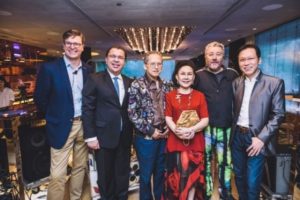 Owners, and those who operate hotels, try all kinds of things to get their property known, and quickly, and to the right people.

There are expensive ways, like putting up an iconic building, say magnificent Burj Al Arab in Dubai or, equally luxurious in another way, the Frank Gehry-designed Hotel Marques de Riscal in Elciego, next to Rioja. Yes, employ an expensive architect.  Or employ an expensive designer.

Here, says the gal, Philippe Starck springs to mind.  He invariably goes over the top. The spa at Viceroy on Brickell, in Miami, has a reception arena with decorative pools and an eight foot high yellow chandelier.  At Raffles Le Royal Monceau Paris, he has shelves of books, in white covers, set around the lobby, at a height of 12 feet.  At The South Beach, Singapore, he has turned the lobby into a world collection of regional memories (this hotel, by the way, will be considerably re-imagined, to turn it, on December 1st, 2016, into a J.W. Marriott).  Now, at M Social, Singapore, which is, like The South Beach, owned by Kwek Leng Beng, M. Starck says he actually does not ‘design’ at all.

His job, says Starck, is to make a stage. ‘I don’t care about the design, design is nothing’, he says. Well, the hotel is already being talked about.  That is one way to get instant publicity.

Another way to put a luxury hotel on the map is to let slip who stays there.  Angelina Jolie and Brad Pitt stayed, of their own accord, the first weekend that The Dorchester Collection’s 45 Park Lane was open – and since they paid their own bill, that is a much less expensive way of ensuring instant fame.