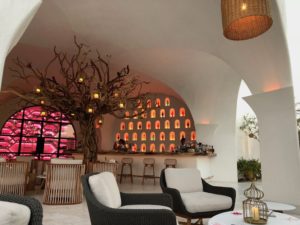 Any luxury hotel benefits when it is run by a great hotelier who is also a talented designer (a necessary plus, of course, is having a cooperative owner). Rosewood’s Las Ventanas al Paraiso in Baja California ticks all the boxes, and in conjunction with owner Ty Warner, onsite hotel MD Frédéric Vidal is always coming up with new ideas.

With guests who stay an average of seven nights, he wanted yet more dining options. The result is Arbol, a brand-new construction that offers Pan-Asian cuisine.  It is set overlooking the Oasis pool, itself a relatively new addition: whereas the main, beach-set pool is somewhat adult, with no play-things allowed, the Oasis pool, away from the beach, allows inflatables, and it has a lazy river, which encourages families (the river at one stage goes through a tunnel, which also has a jacuzzi inside). You dine at plain wood tables set with the most unusual all-white Gaudi-shape china – apparently Ty Warner was dining somewhere in Spain when he called back to Mexico – yes, it was middle of the night, there – to say he had found a local china source that was much more exciting than the Bernardaud which was about to be ordered.

Arbol is mostly outdoor seating, apart from some tables under the kind of shell-shaped proscenium that one associates with outdoor concerts (this structure has, inside, the music operated by a young man working a laptop down at ground level, and the colour of the whole changes from cream, to flaming night, post-dusk – see above). Also here, in the semi-covered area  are the kitchens, headed by Anand Singh – there are two tandoor ovens, and woks, and everything needed for sushi through to curry. Arbol seats 65 and it is already, after less than two months, so successful that it hosts over 90 diners every night. Two more, by the way, can dine at a table set up in that jacuzzi.  This is a luxury hotel that is amazing fun!