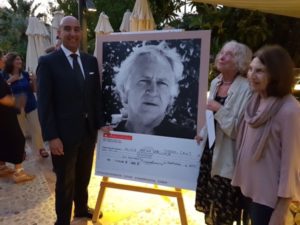 The luxury Belmond La Residencia hotel hosted the biennial George Sheridan Art Prize this last Tuesday, September 26th, 2017, and, says the gal, it was win-win for everyone. The hotel, which has 73 stunning bedrooms (some with private pools) always has an ultra-cultured guest-mix – among those resident this last week was Klaus Kabelitz, who will be opening GM of Belmond’s forthcoming London hotel, Belmond The Cadogan. About 60 guests accepted hotel GM Ulisses Marreiros’ invitation to the award cocktail, and they had the chance to network, over Cava and canapés in the gorgeous olive-tree and citrus-fruit gardens, with the same number of local artists and other Deia home-owners.

It is thought there are 50 or so working artists among Deia’s mere-640 population. Many of these came here first on holiday, and stayed.  Cecilie Sheridan, from Bristol, England, came on a trip in 1964 and never left. She married Boston-born artist George Sheridan and it is she who, in his memory, organises the Art Prize.  Helped by four other professional artists, from the Spanish mainland, the winner of this year’s theme, The Kiss in Art, was Alice Meyer Wallace (who, as an American holidaymaker, was persuaded by Robert Graves, back in 1965, to buy a house here).

At the announcement, her winning mixed-media Kiss sold immediately.  Coincidentally she is also, since this last Friday, exhibiting in the art gallery of the Belmond La Residencia.  So she benefits, to the tune of a €1,000 cheque from the hotel, and so do the village’s artists overall as luxury travellers are reminded of the many cultural benefits Deia, and its top hotel, have to offer.