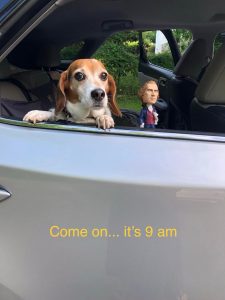 It’s a funny old world. I remember being amazed at the carwash-type shower that dogs had at their disposal before entering Ritz-Carlton Tokyo. Not long afterwards my good friend Sam Ohta, himself a canine lover, took me to Hyatt Regency in Hakone, where some rooms have their own wired-in exterior dog rooms.  Now it is becoming increasing popular for hotels to court human guests who want to bring along Fido, too.

Along with this we have hotel dogs. Mr Walker, a one-time rescue dog now entrenched daily at Park Hyatt Melbourne, delights guests, and staff.  At The Jefferson in Washington DC, Lord Monti ran unsuccessfully as a presidential candidate in 2016 (he has now retired to lick his paws in canine grief, though he has just finished a 3,000-mile round-USA road trip, accompanied by a miniature Thomas Jefferson). In Boston, Fairmont Copley Plaza’s lobby lab ‘authored’ books, much to fans’ delight.

A few yards away at Mandarin Oriental Boston, GM Philipp Knuepfer brings his golden retrievers Bonnie and Cara – see above – to work most days. They sit for hours in the lobby, next to a facsimile lobster pot and two red-felt lobster toys.  But Bonnie and Cara are real, and they, like all the other pooches mentioned, are a reminder that increasingly luxury hotel guests want to be around animals, just as so many of them are at home. Another, of many, special points about this particular hotel is that it is also keeping up to the minute by renovating bedrooms. Alexandra Champalimaud, fresh from restoring Raffles in Singapore, is the designer. As well as her signature so-empathetic pastels she has one wall of paper, intentionally to give just a hint of the orient. There are the occasional bird among the foliage – no, the world is NO being taken over by dogs.