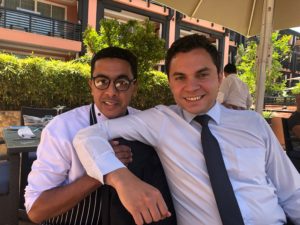 The bienniale Bocuse d’Or, in Lyon, January 2019, saw Denmark walk away with the top accolade in the entire culinary world, but praise must also go to all the national teams that competed. The Morocco team was led by Issam Rhachi, Executive chef of Hôtel & Ryads Barrière Le Naoura, Marrakech.  This happens to be a luxury hotel under ten minutes’ walk from the main Mosque, an oasis in a metropolis in so many ways, says the gal.

The 85-room hotel is built around an enormous heated pool – see the photo above. To one side are 16 ‘villas’ or ryads, three floors with at least two bedrooms (the Chairman of Groupe Barrière, Dominique Desseigne, loves the calm of the place so much he makes one of the villas his home for several months each year). And, of course, being French he, and his company, care about its food. Breakfast and dinner are indoors, at Fouquet’s. Lunch can be outside, by the pool, and it seems that Issam Rhachi is just at home producing, say, burrata atop fresh-puréed tomatoes as he is producing gourmet dinner fare. Food is definitely a pull in attracting the growing number of Moroccans who are now, it seems, staying in luxury hotels, especially at weekends. Having such a personable chef is also a plus when Reda Chraibi, the hotel’s head of Sales Marketing, is courting meetings, incentives, weddings and Bar Mitzvahs. All in all, Isaam Rhachi is a good catch.