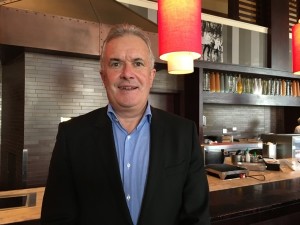 Tomorrow night he hosts about 200 of the world’s leading travel advisors, and hoteliers from top hotels and resorts in Sub-Saharan Africa.  All are in Cape Town for ILTM Africa, the continent’s leading luxury travel event which starts tomorrow, Monday April 4th, 2016, and runs in all for three days. ‘This year’s show is bigger and better than ever’, says ILTM Africa Manager Gareth Baguley.

‘I am just praying it will not rain’, admits Richard Lyon, a long-time Marriott executive who trained at The Savoy in London. Hosting your peers is always a delightful challenge, but he has the venue to do it – his hotel looks out on Victoria & Alfred Waterfront‘s inner dock, and its ten-room spa is on a separate island, perfect for parties.

His guests include, in alphabetical order, top travel decision-makers from Australia through to the USA, via Bulgaria, China, India, Korea, Saudi Arabia, Taiwan, UAE and UK. There will be lots of networking over premium Cape wines, and foods from the hotel’s highly popular Nobu, and Reuben’s, restaurants. Perhaps travel agents from Brazil will be introduced to such local dishes as lamb bobotie in samosas, and springbok carpaccio, and perhaps colleagues from Canada will notice that some dishes are served on wood platters, made in Franschhoek from old French oak barrels marked Trudeau, for the family which makes them – they are not, apparently, related to the Canadian Prime Minister.