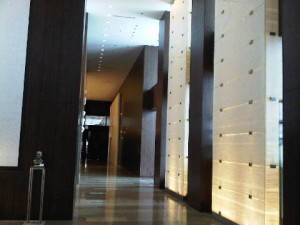 Some hotels are obvious, with enormous signs outside and prominent front doors.  Who could not find, for instance, the New York Hilton or the London Hilton on Park Lane?

Keeping within the Hilton family, Conrad Tokyo is more discreet, from outside. The gal followed directions from Shimbashi JR station. Out of main entrance, turn right, to end, turn left and so on.

All this is subterranean, in the chic activity below-ground that connects much of central Tokyo. There are fullscale shops down there.  No need ever to emerge… except that there is an appointment at lovely Conrad Hilton, part of the Shiodome area, a massive development by the Mori Trust.

Ah, finally, after about ten minutes turning right at this, left at that, one gets to a long escalator, up to ground level and one more turn and you see the hotel’s door. 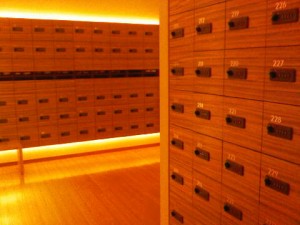 A corner of the locker rooms in beautiful-beautiful Conrad Tokyo

But you are still not properly there.  You take an elevator to the 28th floor lobby, and emerge into space.  The area is so tall you wonder if you are in a cathedral.  It is a somewhat religious experience, emerging into this lobby.

If it feels like this to a tall western woman, what must it feel like to a petite Japanese who lives in a confinement that could be total 500 square feet and no more than eight feet high?  My Japanese friends love this hotel, for its space and because it is ‘so Japanese’.

Even the locker rooms on the wellness floor are a beautiful sight. Upper floor corridors, on the 29th through to 37th floor, are 100 yards long, and straight, with one long length of carpet about four feet wide, pale green with a delicate white cherry blossom pattern, brilliant. 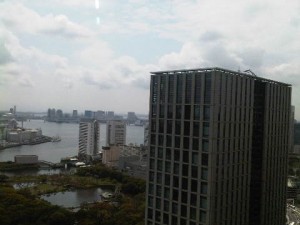 View, on an 'uncertain' day weatherwise, down from room 3645 of Conrad Tokyo

Room 3645 looks down at a stunning view of Hamarikyu Gardens and Sumida River and, beyond, Tokyo Bay.  Yes, the garden is a big green area.  Greenery, in the middle of Tokyo.

No wonder many business guests stay here so often it almost feels like home. In the 37th floor club lounge I ran into a long time friend, based in Singapore, who is in Tokyo about a third of his time, for business.  For pleasure, he lives here.

This club lounge, by the way, has a resident chef. A guy next to me had a croissant with lots of jam on his plate, went over to said culinarian and said please put scrambled egg on top.  I think he, the customer, was American. The Japanese, the chef, did not flinch. He has seen it all before. 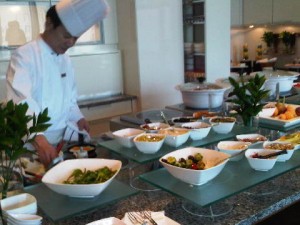 The owners have invested heavily in this place. The art includes a pair of scarlet sculptures, down at ground level.  Both are ten feet long.  One stands up, one lies down.  Artist Nobuyuki Tanaka calls this Purifaction.

My own reaction, after finding my way along that subterranean mystery tour, was Relief.  There are old scrolls, reminders of the ukiyo-e (images of the “floating world”) that were were created from the mid-17th century through to the 19th century: they were to have a profound influence on such European artists as Edgar Degas, Vincent Van Gogh and Édouard Manet .

Up in the main lobby here, you look through to the main bar-lounge and see a 12-foot long glass-sided working fire, the flames soaring up in absolute contrast to the view, through whole-wall, double-height, windows beyond of Tokyo Bay.

This is natural art. Near the fire is a 12-foot high display, also glass-sided, of liquor bottles.  There is a 22-foot high wine cellar in the Chinese restaurant, China Blue, which has a Michelin star. 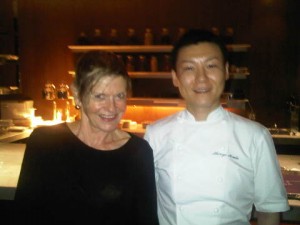 Mori invested in food and drink, here. The other Michelin-starred restaurant is Gordon Ramsay at Conrad Tokyo, one of Gordon Ramsay’s more successful, and lasting, overseas ventures (he also oversees Cerise restaurant here).

His chef at Conrad Tokyo is the charming, boyish and oh-so-talented Shinya Maeda.  He rushes (in so far as any Japanese can rush, without being inelegantly rude) over to greet us, to suggest his favourites.  He wants me to try his six-course Prestige menu, his three-course Menu Du Jour, his four-course Tasting Menu.  Stop.

We compromise, but he still adds on a couple of pre-dishes, tiny bite sizes to amuse.  First comes a second-finger of squid-black toast topped with salmon roe accompanied by a little-finger size of rice paper wrapped around his own-smoked salmon.

Next is a two-gulp of pea consommé topped with crème fraiche.  Now the meal proper, and items are still one-bite, and delicious.  I go for his foie gras, followed by pig three-ways, and a couple of bites from the cheese trolley, and ‘strawberries’. 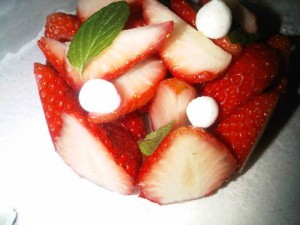 Strawberries, as served by Maeda-san

Why is it that in Japan everything tastes so good? And the food is served with such respect. Apparently 80 percent of the keen young people working here are graduates. At 0900 my bag will be picked up… at 0900 precisely there is a knock on my door.  He takes the bag.

I ask if the concierge can have a map ready to show me how to get back to Shimbashi.  I have one here, with a smile.  He takes a clear wallet out of his breast pocket, takes out the appropriate printed map, explains it to me.   I think back to our dinner conversation last night, about young Japanese.

They want life satisfaction more than their salarymen forefathers: they may still live at home, for some reason called ‘grasseaters’ who make the most of their situation. The young women, meanwhile, are happy with their girlfriends… so what about all those weddings? 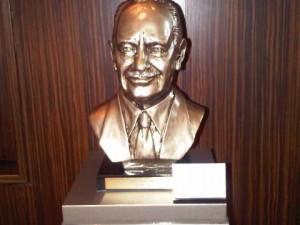 The bust of Conrad Hilton, in the upper lobby, denotes best in form, 2011

The pool, down 21 stone steps from the Technogym fitness area and spa, opens at 0600.  I am alerted that at 0630 a pair of local health club members always come to swim.  I am finishing at 0630 when, again on the dot, two guys come down.

One wears normal swim trunks (not the American floppy bags that were designer-elevated by Vilebrequin in St-Tropez in 1971).  The other wears the most amazing pair of sculpted briefs, two shades of blue with white piping, that extend down to his ankles.

Japanese must have the right sports gear, at all times. Later, an hour after my bag left, I too must leave. I pass a bust of Conrad Hilton in the upper lobby.  This hotel won best Conrad worldwide 2011 (a fact of which hotel GM Gregor Andréewitch, one of the Tokyo Mob taking part in this weekend’s super-triathlon, is understandably incredibly proud).

On my success journey back to Shimbashi I think about the book I am reading, John Grisham’s The Litigators.  Another of the former lawyer’s books, The Firm tells the story of attorney Mitch McDeere, and features – product placement, this – two Washington DC Hiltons, the Capital Hilton and Washington Hilton.  Hilton has done a deal with the producers, AXN and Entertainment One (eOne) and Sony Pictures Television Networks.

Enter a competition via www.axn.com and the lucky winner will get Business return airfares for two and six nights bed and breakfast to any hotel of their choice.   Unfortunately you have to be resident in Latin America, Southeast Asia – or Hungary, Poland or Spain. What is the geographical logic of that?  Having just had almost 24 hours in super-luxury, at Conrad Tokyo, that would be a winning choice, and not only for the breakfast.