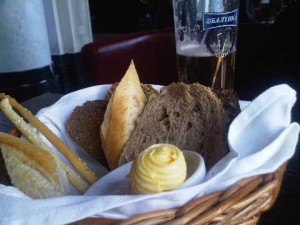 Simplicity – the finest home made breads and local butter

The simplest things in life can be the best, but the gal knows that sometimes the simplest are the hardest to achieve. We were having a quasi picnic dinner at Borsalino restaurant in St Petersburg and My Man said wow, this is the best bread and butter ever.

The butter turned out to be Polish and the breads were home made.  Why a picnic? Well, Italian restaurants are two a penny in St Petersburg – the democrats, a name for the young, upwardly-mobile new generation of Russians, love Italian, love Japanese, and I knew anyway that this David Collins-designed restaurant in the Hotel Angleterre was good (funny how there are Angleterre hotels in so many cities, always the French spelling, think Berlin, Copenhagen, Paris, Rome..).

Turned out the entire place had been taken over for a film evening but we could sit in the bar area outside. Bread and butter and brawn and brains as the young elite of St Petersburg streamed in.  Eight-inch heels and blue jeans move inside, and leave the black Hummer with its rooftop search lights outside… 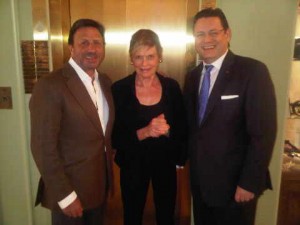 Angleterre is the arty-casual conjoined sibling of the iconic Astoria, both of which are majority-owned by Sir Rocco Forte.  Having flown in with him the other day, I knew he was in town, and we did catch up.

We admired the plaques, by one of the Astoria’s elevator banks, commemorating just some of the famous guests who have stayed at the hotel since its opening, December 14th, 1912.

The hotel was built for an English consortium who named it after the Waldorf-Astoria in New York: the ill-fated group lost their investment as first World War I and then the Russian Revolution plagued St Petersburg, which was to be renamed Leningrad.  During the nightmare three-year siege of World War II the hotel became a hospital. 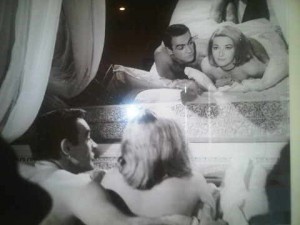 From Russia With Love, on the bathroom wall of suite 407, Hotel Astoria

As part of its centenary the hotel is being redesigned by Sir Rocco’s sister, Olga Polizzi, design director of Rocco Forte Hotels.  It is Obviously Olga. Bedrooms have plain walls, bold use of colours in waves-on-headboards that match day cushions.

Add the occasional sculpture and an eclectic collection of books.   Add such whimsical pointers as, in the bathroom of 407, a large photograph of Bond, James Bond, with companion in From Russia With Love. 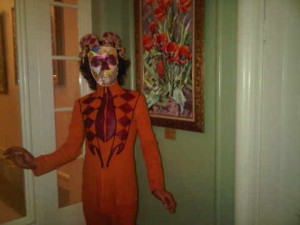 A masked jester invites you to a party at the Astoria

Russians love events.  Down at ground level, the Rotunda (a 270-degree shaped room looking into the square outside) is where people gather for tea or drinks.  The Rotunda is also ideal for watching people coming in to private parties. Some of the finery not going to the movie evening at Borsalino is walking past the Rotunda now, going along a corridor to one such invitation-only happening.

The lucky guests are greeted by a jester. You really have a feeling that in some respects, little has changed.  A hundred years ago they undoubtedly sat here having tea, at tables set with finest linens.

Today the Astoria, a Leading hotel, gets all its tablecloths and bed linens (and covers for the Kleenex boxes) hand-embroidered from the Volga Linen Company.  Today’s tea china is Lomonosov Imperial Porcelain, designed in 1744. 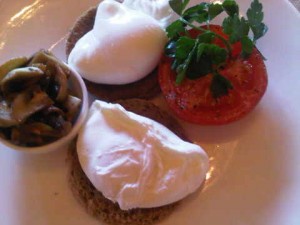 And back to the world’s best bread and butter.  The hotel’s German GM, Walter Neumann, and Canadian chef, Ian Christopher Minnis, are both Russian-speaking, passionate about the country and its produce (both, interestingly, have Russian wives).

They have discovered a monk-led farming initiative in Mednoe Village, south from St Petersburg on the way to Moscow.  At the breakfast buffet there is an organic corner, with such tasty farm-produced ricotta and mozzarella you could eat it forever. The Mednoe eggs produce the perfect ‘English breakfast’. 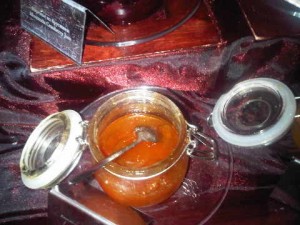 A young waiter called Sascha has had barista training and he manages the coffee machine at the breakfast room’s big bar. He keeps the beverages flowing while you help yourself, to more of that delicious bread, and as well as French pots on the table there are big containers of jams, home-made here at the Astoria.  The simplest things in life really are often the best.