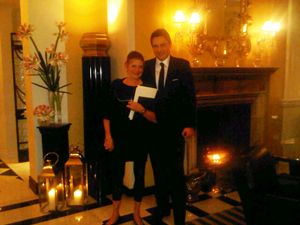 Thomas Kochs, mine host of Claridge's

Claridge’s is the temporary London home of royalty, and rich and famous.  Joan Collins married Percy Gibson there – and they are still together, which says something for the locale.

There is lots of history here.  Way back in1854 Mr and Mrs Claridge took over Mivart’s Lodgings in Brook Street, Mayfair.  In 1898 a new building was constructed on the site, for opera impresario Richard D’Oyly Carte.

In the 1930s famous architect and designers Basil Ionides came in to tweak the interiors, put up a few columns here, a few three-dimensional reliefs there.  Spencer Tracy later admitted he did not intend to die ‘but when I do, I don’t want to go to heaven, I want to go to Claridge’s’. 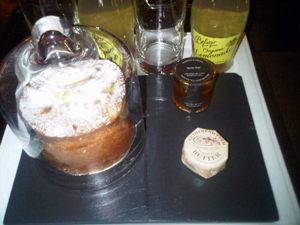 This is the hotel that every year has a designer Christmas tree.  The gal went to the launch of the John Galliano for Dior tree in December 2009.

The weird and wonderful sculpture that barely represented a ‘Christmas tree’ wound its way up the stairwell, past the mezzanine to the first floor, while at the launch the non-weird and totally-wonderful invitees packed themselves up and down the 42 carpeted stairs to that first floor to try to see and definitely to be seen.

Thomas Kochs is the new boss (‘gm’) and he is wonderful too.  One of his myriad fans merely says ‘he is a real gentleman’.  He treats everyone alike, and thank goodness he did not go ahead with medicine, as he originally half-planned back home in Cologne and Munich. 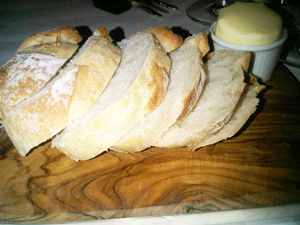 Simple style - great bread, hand-sliced, on a wood board with silver edging

Kochs has taken Claridge’s style on and up to the minute. Bedrooms have pens that look designer, and really thick notepaper embossed in gold (self-seal envelopes of course), and Krug in the minibar and Bamford organic toiletries in the bathroom.

A small cake, with candied orange and orange peel, awaited as welcome, with Netherend Farm butter, from Gloucestershire, and Claridge’s own apricot jam, made by film-makers Nick and Judy Gifford’s Tea Together team at St Rémy au Bois using a recipe devised by hotel chef Martyn Nail. 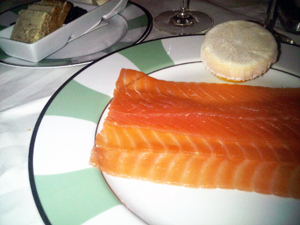 Smoked salmon on a porcelain plate, and lemon in a little 'hat'

Martyn is your dream chef, down to earth and realistic.  He is a twin, and back home in the Hampshire countryside he used to make jam with his mum.  Five years ago I remember him sharing how he asked suppliers to bring real animals into the hotel so that kitchen and other staff – and guests – could learn to recognize one high-and-mighty hen from another breed.

We all talked about Michelin-style food.  High-level guests are turning away from it fast.  They are much more interested in real products and they want to know where they come from… simplicity over mushed up confections. Will ‘Michelin’ ever come back? Shrugs and Gallic ‘who knows?’. 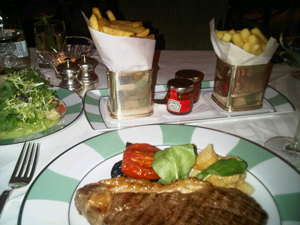 Steak, with English chips and French fries and an artichoke salad

After such statements, of course we dined in the centre-of-it-all Foyer & Reading Room, at the rear of the action-filled main lobby so you can see all those Rich and Famous coming and going.

There is a 300-piece white Dale Chihuly chandelier overhead that looks, so typically of this Seattle glassblower, like a mess of half blownup white balloons. Lowish tables, which convert from the afternoon tea still going on next to us, are set with champagne-coloured cloths, and Claridge’s green (pale apple) Bernardaud porcelain exclusively for the hotel.  You can have sandwiches here, or big or small salads, or full three course table d’hôte, but we went à la carte.

Simply quality, here. Bread, in the form of sourdough slices, pre-cut, comes on a wood board, with silver surround.

Salmon, smoked in Severn and Wye, is simply two rectangular slices, without fuss. But its lemon wedge wears a linen bath cap and it comes with a three-part dish, with one-bite soda breads, and sour cream, and beetroot relish. 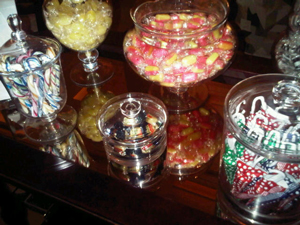 Everyone who knows the gal knows her love of good beef, so what better than a grilled Aberdeen Angus sirloin, again simple, sauce on the side. The bone-handled steak knife was, as I expected, Laguiole (the one with the distinguishing bee at its shoulder).

We had a tasting of the chip family, with paper cones – in silver jars, of course – holding either thicker-cut, English ‘chips’ or, the winner as it turned out, thinner and drier French ‘fries’.  And we had a memorable tasting of Clarendelle 2004, from Prince Robert of Luxembourg’s Haut-Brion stable in Bordeaux.

We toasted royalty, here at Claridge’s, and as we left the dining area took hotel-marked paper bags to help ourselves to ‘British sweets’.