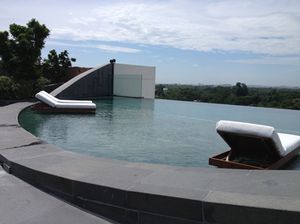 Rooftop pools wow.  Full stop.  Question, do ALL rooftop pools wow? And is it ONLY rooftop pools that wow? The gal says that, whatever, the pool atop the eight-floor Park Hyatt Chennai is stunning. Look at its shape, an oval that has peripheral wings that rise one end, as if a Zaha Hadid design. There are loungers set permanently in the water, facing over the city. It makes one think of the loungers similarly permanently paddling in pools, as at St Regis Singapore… where else? 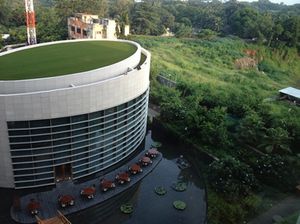 Look down at the oval rooftop of the Flying Elephant…

You can look down, from the rooftop, at Guindy Park, the eighth biggest national park in India. Today it is the extension of the Governor of Tamil Nadu’s official residence, Raj Bhavan, and its known inhabitants include over 2,000 spotted deer and over 60 species of spiders. Yuck, did someone count them?  I think of driving a few years ago from Siem Reap – where there is a new Park Hyatt – to the Cambodian capital, Phnom Penh; along the way you pass the world culinary capital of deep-fried spiders.  You can also look down, from this rooftop, at the grass-covered oval roof of The Flying Elephant, the most-exciting new hotel restaurant concept of this decade. 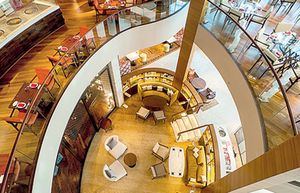 .. and inside the Flying Elephant

Designer George Wong has produced a masterstroke.  Steps and cantilevered restaurant stages give assorted ‘dining areas’, with five live kitchens as  you spiral up, through three floors themed for a silk magnate’s private home. Start with the bar, move on to a lounge, on up to a living room (Indian style, with silver thekri, mirror-work, on the red walls). Further up you come what could be called the spare room, with two scarlet tables that somehow, despite only a glass wall and so many people around, is popular for romantic dining.  At the very top, the ‘bedroom’ is private dining, with scarlet table for ten, and golden sofas for the same number. In all, about 260 can be fed, wherever, at any one time. 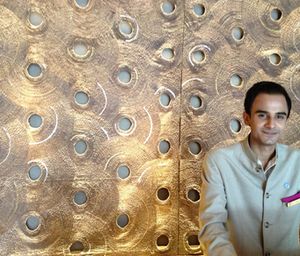 But everything is flexible. Variously throughout an evening, all the casual-gear servers break into an impromptu two minutes of gangnam style, à la Psy. Some evenings they have live DJs. Some daytimes, private parties take over the dinner-only restaurant. Wherever you sit you can choose Indian, Asian, western, anything (chef Stig Drageide is Norwegian and his salmon is divine, especially with local tandoor-cooked laccha paratha bread, like flattened circular croissant). You can spend time looking at knickknack collections on bookshelves, placed there by hotel owner Vijay Mahtaney, whose family business, Ambattur, produces gear for Zara and others. Not surprisingly, the main part of the hotel is themed for silk. 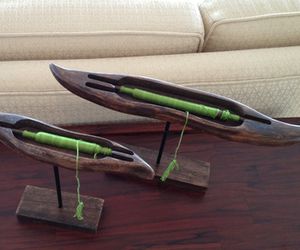 It is brilliant.  Behind front desk is a panel of coiled silk rolled rather like laccha paratha but with central holes, open to the wall behind.  By the elevators on the main floor is a stick-pin design formed of real silk spools. Every one of the 201 rooms has a sculpture of large-size spools holding real silk.  I almost expected the robe in end-suite 515, a 950 sq ft honey marble beauty with fan-shaped salon, to have silk robes and or sheets (fortunately there were neither – I did sleep in bright pink silky sheets once, at an old Sheraton in Shanghai, and I nearly fell out of bed). 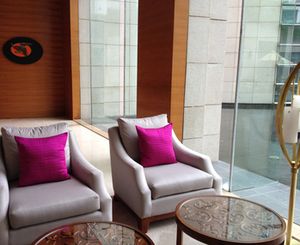 Silk cushions in the hotel lobby

The silk theme here is taken right through to its conclusion, in the form of Jim Thompson-hued silk cushions in the lobby. But George Wong knew where to stop.  I saw no silk in the super breakfast room, with a Berkel-type slicer on the elegant fruits-and-viennoises breakfast buffet (hot dishes come from the kitchen). There was none in either the gym or the spa, which has super wet and sauna-steam facilities, separately for each sex. And I do not think the staff gear was silk at this luxury hotel, though the chic cut of, say, the bellmen’s shirts and stunning French rail-type hats suggests a Frenchman had a hand in their design. I almost wanted a job here, or a reason to stay, if I could wear one of those hats.