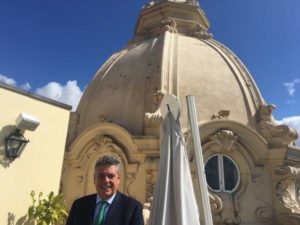 Westin Excelsior Rome, right on via Vittorio Veneto, has had a multi-identity past. The Excelsior opened January 1st, 1906 – the opening dinner, a 13-course affair, was created by Escoffier. Since then it has been overseen by Ciga, then by Starwood Hotels and Resorts and now, of course, it is part of Marriott International. The crowning glory of the five-floor hotel is, literally, its rooftop cupola (area GM Marc Lannoy, who looks after this and St Regis Rome, shows it off, above). Immediately below the cupola is this luxury hotel’s biggest suite, Villa Cupola which in fact is the largest in town. It is, says the gal, a full 11,500 sq ft, stretching over two floors: go upstairs to your private cinema and Technogym, and indoor whirlpool, and head out to the terrace, around the cupola. 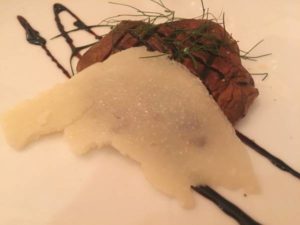 Villa Cupola, which was designed by Michael Stelea, has a private elevator, amazing frescoed ceilings with Murano chandeliers, a velvet-curtained four-post bed, and dining for 12. In fact I dined at Doney with Marc Lannoy, and his wife Alicia, who heads the Spanish press contingent at the Vatican. Why Doney? Thanks to the Lannoys I now know it refers back to the 1850s when a former Napoleonic soldier, Gasparo Doney, opened a patisserie in Florence selling imported Paris pastries (how did they survive that long over-land journey, in the days before refrigerated trucks?).  Doney expanded, his second shop was right here, and the hotel was built around it, so to speak. Now both Café Doney and the adjacent Restaurant Doney are inside, overlooking via Veneto, and they both spill out on to sidewalk terraces. 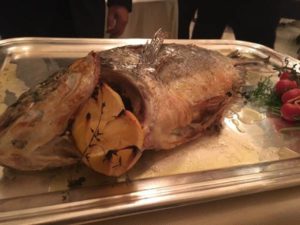 Chef James Foglieni came to our table to show a tray of fresh porcini, and then he brought out an enormous seabass – our meal, not surprisingly, was grilled porcini with parmesan, followed by seabass, and we drank the Antinori family’s Cervaro Castello Della Sala 2014. I relayed the story of staying at Castello Della Sala, the statutory one night for Antinori’s professional guests. Dinner there was home-made pasta, grilled chicken and salad, and icecream (probably not the Grom that is a specialty here at Doney). We were served by an extremely mature local lady, and as we left the following morning there she was, chasing around the courtyard trying to decide which of the squawking, flapping hens she was going to be cooking for the next set of overnight guests, in a few hours’ time. 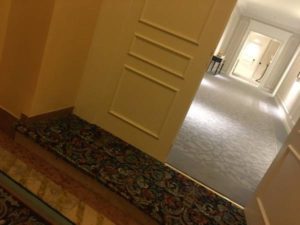 Westin, by the way, is very much into real food and healthy eating. I was impressed by a Carreri booklet describing characteristics of Italy’s olive oils, say Lombardy for elegance, Puglia for clean favour. In my room, an Enhance Your Well-Being booklet promoted staying fit, staying productive and more, even down to staying longer, namely weekends with extended breakfast hours and check-out times. In the main Technogym, I found a really lively and well-used space, and having sudoku made me happy. Also on the health side, Marc Lannoy wanted to show me what is happening at St Regis Rome, so we walked down there. Wow, that really venerable hotel is going to give luxury watchers a massive jolt, for the good. One Qatari entity owns the Westin. Another, Constellation, owns the 1894-vintage St Regis. Pierre-Yves Rochon’s design magic is already showing. The hotel’s lobby is a simply stunning place of ice blue and white, with a massive Murano chandelier to match. The photo on the right shows a bit of the show-corridor, light and periwinkle, next to the old corridor, faded dark cream, and, I can tell you, the show rooms, in periwinkle and off-white, or taupe and off-white, absolutely epitomise luxury style, 2017 vintage. NOW SEE A VIDEO OF THE LOWER FLOOR OF VILLA CUPOLA