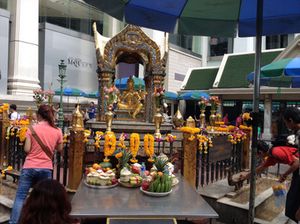 The travel advisories against going to Thailand were lifted late June – yes, even the ever-cautious Americans cannot come up with a reason not to go there. Travellers from Hong Kong and Japan are returning. The gal wanted to see for herself why Bill Heinecke, owner of so many luxury hotels in Bangkok, had been ranting and raving against the global media for making mountains out of molehills, for scaremongering, and putting people off travel. Walking north up Rajadamri Road from the beautiful and elegant, but lively, lobby of Four Seasons Hotel Bangkok, outside was business as usual. 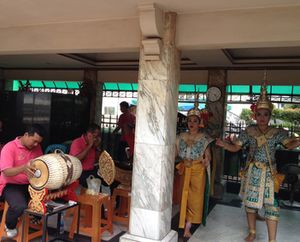 Dancers and musicians (the one on right on his phone)

The Erawan Shrine, at the Ratchaprasong intersection of Ratchadamri Road, was built 1956 by the Government, which owned the Erawan Hotel that stood here, to counter negative influences of bad karma caused by laying its foundations on an inauspicious date. As a result of this, construction saw high cost over-runs, and injured workmen, and a shipload of Italian marble to beautify the hotel somehow got lost enroute…. Someone also pointed out that in earlier times criminals had been put on public display here. Never mind, thanks to the Erawan Shrine, the Grand Hyatt Erawan, which replaced the Erawan Hotel, had many years of fine reputation and business. 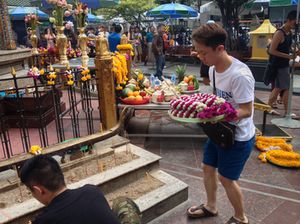 Today there are dancers to one side of the shrine – I am amused that one of the accompanying musicians is simultaneously talking on his pale-pink telephone (what is it about pale pink in this part of the world? the funeral party in Siem Reap were sitting on pale pink covered chairs, and here is a grown man using a pale pink phone – in the west no self-respecting male member of the species would be seen with a pale pink mobile). There are tourists taking photographs, no-one minds, but no-one gets in the way. Skytrains soar past noiselessly overhead. Skytrains have, by the way, revolutionized Bangkok’s traffic. 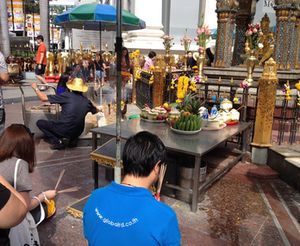 There are people of all ages

The days when it took an hour or two to get to a meeting are now prehistory. Get on the Skytrain and arrive where you want, on time. This is, of course, good for the economy. More time can be spent in productive meetings or, for all the thousands of holidaymakers here in town at any one time, there are more hours, or at least minutes, for shopping. A conversation comes up about Chinese visitors flooding to Chiang Mai, especially, as a result of the 2012 movie Lost In Thailand (having Fan Bingbing appearing in it really helped – the Chinese equivalent of Scarlett Johansson and Bill Murray in the 2003 in-Tokyo classic, Lost In Translation). 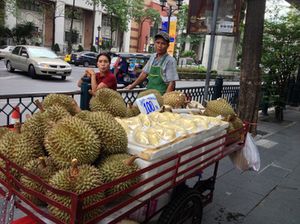 Fruit-sellers are there, as always

The more time they have to shop, as they pass through Bangkok, the better for business. On my way back to Four Seasons Hotel Bangkok, I pass the ubiquitous stalls selling doughnut-looking things, and tiny sausages, and fruits I do not recognise. It is a perennial puzzle how Thais, like their neighbours in south-east Asia, seem to snack nonstop and yet some of them have those waists you can put two hands round, with room to spare. I am going to spend my money on another little coin-purse, in the Jim Thompson store in the hotel. 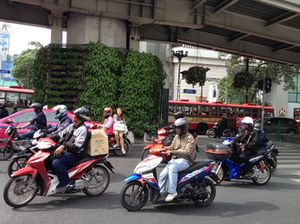 .. and so are the jams of motorbikes

Some things never change. Motorbikes still wait en masse at traffic lights, and then surge together. There is surprisingly little pollution (how the Chinese, used to Beijing and other cities, must love this clarity). Oh yes, and there are no military whatsoever. During my walkabout I saw not a single sign of an army, or any other, official uniform. Back at the luxury Four Seasons Hotel, it seemed even more that nothing had ever changed….