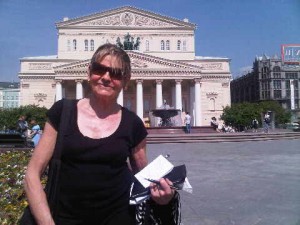 Bolshoi means big, grand or great, and the Bolshoi Theatre, finished in 1825 by architect Joseph Bové, reopened October 28th, 2011, after a $680 million renovation.

Apparently, the gal is told, that whereas in Soviet times the audience went to performances straight from work, in drab everyday clothes that included frocks in artificial fabric that looked like a Beverly Hillbillies night out, now people dress up, especially the women.

Today it is haute couture, Chanel and the like, and the seven inch heels or more. Today they can nibble on food prepared by, no, not Arkady Novikov or Ginza Project (the two big multi-restaurateurs) or even one of the top luxury hotels in town but by – Kremlin Catering.  Since this also provides the caviar and Russian salads and the like for official Kremlin guests, it cannot be too bad. 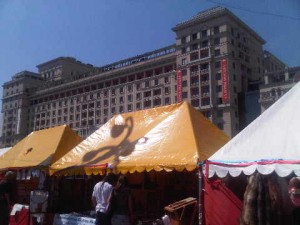 In front of what will be Four Seasons Hotel, Moscow, a pop-up market has set up shop

Four Seasons, or what will be Four Seasons Hotel Moscow, is three minutes’ west of the Bolshoi.  When it will open appears to be anyone’s guess.  In November last year it was stated that an oligarch called Ashot Yegiazaryan has fled to the US over apparent irregularities over the reconstruction of the former Moskva.

From outside, the renovation of the original 1937 building looks complete, but what is it like inside?   Renovation of what should be a 210-room hotel, with Richmond International interiors, has been going on since 2003.  Meanwhile life, with pop-up vendors, goes on around it. 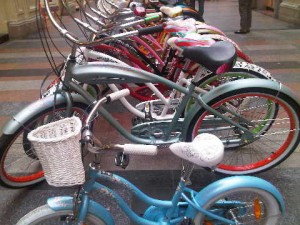 It is so hot that a bicycle would be just great to get around.  Daytime, you hardly see any bicycles.  Partly this is because of the weather (too hot, too cold) but mainly the drivers have probably road-killed anyone who dared to venture out on two wheels.

What will Fairmont do when it opens the former Pekin Hotel?  Fairmont has a partnership with BMW which means you can borrow BMW bikes, usually on a first-come-first-served basis, in their hotels.  Last BMW I borrowed was in Washington DC, where there was that marvellous ride-through-the-cherry blossom to Arlington.

There is a colourful row of Paul Smith bikes in the historic GUM department store, which stretches a full 794 feet along the eastern side of Red Square.  It opened  between 1890 and 1893 as the Upper Trading Rows, designed by engineer Alexander Pomerantsev, and became the State Department Store during the times of the USSR.

Now it is a brilliant complex of 200 stores, on three floors, overseen by its owners, Bosco di Ciliegi, a luxury-goods distributor, and supermarket company Perekrestok.  It is open 1000 until, as we discovered later, to 2200 SHARP.

GUM stands for Glavny Universalny Magazin and its stores range from Zara up to every global brand, including Paul Smith. It is fascinating just watching some of the locals.  Swinging youngsters are side by side with older traditionalists. 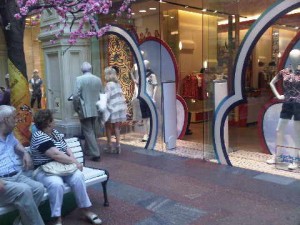 Look how this couple (right) gaze round in disapproving style at a getting-on-female in a far too short fluffy outfit.  Some of the best shopping, however, is ten minutes’ walk east, at Tretyakovsky Proyezd, a mid-16th century walkway revitalised as a shopping precinct in the late 19th century. 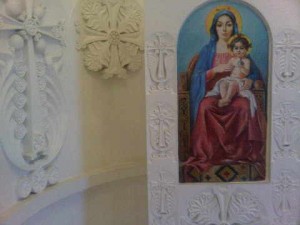 Tretyakovsky Proyezd is literally across the street from Ararat Park Hyatt Moscow, itself one block east of the Bolshoi. The hotel is on the site of the former much-loved Ararat restaurant – hence the hotel’s name.  It opened here ten years ago, owned by the Sargsyan family’s ZAO InterRus-M company, led by an MP, Samuel Sargsyan, whose name at one time was probably, probably still is, Sargsian.

This is the Armenian (end in –ian) part of town, and the hotel opened with its own Ararat restaurant.  It looks like a wooden theatre plonked into the 220-room luxury hotel’s elegant lobby, but soon it will look more like an integral part of the whole as it is being extended and redone as part of Tony Chi’s mega re-do.  What Chi will not change, however, is the hotel’s unique Gregorian chapel, in what would be room 932.  Many come here, for calm, or to light a candle. 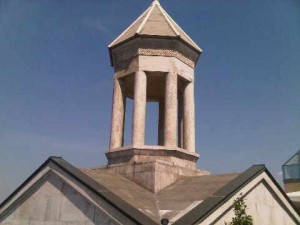 The chapel’s presence is marked by a tower emanating from the 11th floor roof of the hotel. Actually there are many unique features here.  This is the only luxury hotel in Moscow to have an open atrium (it is not unlike that of the Hyatt Regency Kviv (Kiev) for you who, like me, know the Ukrainian capital).

The gold columns are missing here, however.  This is neither bling nor over-the-top, and nor will it be when Tony Chi has finished.  Think of his minimalistic-quirky SkyLofts above MGM Grand in Las Vegas, or his stunning neutral-colour Park Hyatt Shanghai. Chi is careful when it comes to ostentation.

Some of the floors here are already finished.  Corridors have deep chocolate-brown carpets – a nightmare to keep clean, but they ‘look rich’ says Chi, who does not have to clean them.  He has replaced mid-wood doors by near-black wood doors, and for some reason put the numbers at a mere 15 inches from the ground, which is fine if you are crawling along said carpets trying to find your way…

He has opened up the bedroom-bathroom divide, and added to the latter white towel-covered stools, which is fine if you are not the laundry.  He has cleverly put sockets by the desk at the back side of a vertical column, which is fine for everyone if you know they are there. 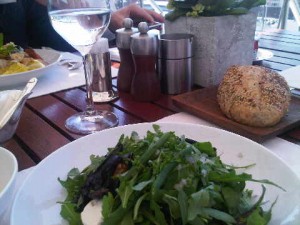 Up on the 11th floor terrace, tables are now set up for outside eating during the summer.  There is choose-your-own salad, say arugula base with additions of chicken, prawn, salmon.  This is one of the must-visit Moscow venues, by the way, of the highly-knowledgeable WorldGuide.

Chatting with hotel GM Stephen Ansell, who briefly left the Hyatt family to go and help the World Bank’s IFC arm in Washington DC, we talk about people.  Of course.  What else?  First visit here at Ararat Park Hyatt Moscow, in a deep-snow time with only shiny-soled boots, I was helped across ultra-slippery Red Square by a young trainee, Mattheos Georgiou, universally known as Aki.

Aki caught the attention, justifiably, of big bosses in Chicago and he moved up, learning from long-time GM of the Grand Hyatt Hong Kong, Australian Gordon Fuller, and then from Philippe Roux-Dessarps, French-Scandinavian boss of Park Hyatt Tokyo. Two months ago Aki was given his own hotel to run.  He is now GM of Hyatt Regency Thessaloniki, in his deeply-depressed home nation of Greece.  But Aki is up to any challenge.

Park Hyatt always has such a strong celebrity following, and the much-mentioned Park Hyatt Tokyo is no exception. Lady Gaga sang there May 10th, 2012 – her YouTube post got 80,000 hits in a week.

In last week’s How To Spend It in the Financial Times, super-ceo of the world’s largest insurer, ICAP,  Michael Spencer, said one of his favourite restaurants is the New York Bar and Grill at the Park Hyatt Tokyo – ‘Invariably, we all leave the restaurant with a big smile, which is how I know we’ve had a successful meeting – as well as a very good meal’.

And, the final accolade, Sir Paul Smith said in the Wall Street Journal this very week that Park Hyatt Tokyo is his favourite hotel in the world.  Yes, he of the striped Evian bottles and of colourful bikes (he is a keen cyclist himself). Next time back at Park Hyatt Tokyo I shall expect to cycle round Shinjuku on a bright Paul Smith bike…