At lunch with the Deputy Minister of Culture and Tourism of the Republic of Azerbaijan, Nazim Samadov, just now at the splendid Kempinski Hotel Badamdar Baku, we talked about everything under the sun – except shopping.

Not only is Azerbaijan spending at least euro50 million on arrangements for the annual [intlink id=”eurovision-baku-azerbaijan-luxury-hotels-aplenty” type=”post”]Eurovision[/intlink] Song Contest next month, it has so much else coming up.  He shared details of the Under-17 Women’s Football being brought here by FIFA in September.  16 national teams of teenagers and their parents and hangers-on.

The main promotional advertisement shows a Louboutin-high pair of shoes with football studs beneath (every female under 50 in this country wears five-inch heels, even when walking babies in sky-high bassinettes over sometimes-crinkly cobblestones.

Samadov said Jennifer Lopez will sing at the onset of FIFA, with Rihanna at semi-finals and Shakira at the finals. 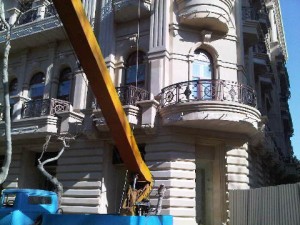 All around the magnificent Beaux-Arts Old Town area of Baku, extensive - and ultria expensive - cleaning up of buildings is going on

The so-much-else coming up includes even more hotels than you might imagine possible.  The gal has seen the hole in the ground that is said to be the next Kempinski, on ‘a crescent’ which as yet is only that hole, off the main boulevard.  Think 2016 at earliest.

She has toured, in alphabetical order, such lodging places as Fairmont, Four Seasons, Hilton, Hyatts (two) and Park Inn.  She has even found time to stay in some of these luxury hotels, and since this is definitely one of the global destinations of the future, stay tuned.  You will read about them all.

She has also found time for mucho exercise, which has included walking round and round the marvellous Old Town.  Every building here seems to be Beaux-Arts, more beautiful than its neighbours.  Every one is being restored, as if a royal palace.  And all the construction work makes travelling round for business, and trying to park, a nightmare. 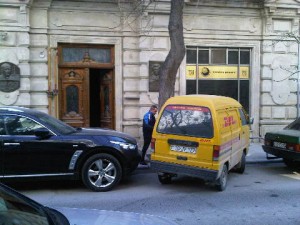 Parking is a problem in Baku Old Town but DHL knows what to do.

Crossing a main road can be a nightmare, too.  There are lots of underpasses, incredibly marbled, thanks to the few quarries that are left in Carrara – these, like the rest of the city, are meticulously clean.  But if there is no underpass, there is one rule.  Find a zebra crossing if you can but if you can’t, cross anywhere.

Simply step out determinedly, turning towards the oncoming traffic and glare at the drivers.  Keep up a steady pace and do not stop, do not deviate.  There is safety, by the way, in crossing in numbers.  If you see locals about to cross, latch on to them.

Sometimes you just HAVE to get to the opposite side.  Right behind Four Seasons (more of which anon – just WAIT), right next to and behind this amazing luxury hotel are such household names as Tom Ford.  Look in the window and you see reflections of yet another gorgeous old building.

Even Tom Ford has arrived in Baku, Azerbaijan.

But not all is old. We have the stunning Three Flames that will be the Fairmont Baku plus offices and residences.  An old Soviet Intourist hotel stood atop the steep hill next to government headquarters, looking down across the city.

Bye bye Intourist, welcome the three 32-floor flame-shaped, blue-glass buildings that are a sign that flames are the symbol of Baku (there are flaming natural gas flares in some parts of the city, apparently).

Fortunately Hassan Gozal, a good friend of President [intlink id=”hyatts-luxury-kingdom-baku-azerbaijan” type=”post”]Aliyev[/intlink], bought the land, got consultant Ben Hughes in for a masterplan and Hellmuth, Obata and Kassabaum HOK to design the inside and the outside (which can be changed from blue to any colour, or to a promotional video, at the flick of a digital switch).

One tower is a 347-room luxury hotel.  The others are offices and residences.  There is a 75-foot lobby, glistening with Swarovski, and a 700-person ballroom (Baku claims the world’s largest annual St Andrew’s Night kilt-gathering, because of its oil industry). The brasserie is French.  The 18-room spa is ESPA, the views across the city are amazing.

Simple, but delicious, breads at Tosca, on the main Baku boulevard along the Caspian Sea

We lunched freestanding, at Tosca, one of several restaurants that the Pasha Group, run by the First Lady’s family, has put up.  Tosca, right on the Corniche, is light-airy Italian, great breads, great pasta, great views along the waterfront – and super coffee.

Consultant, I am told, is Blue Sky Hospitality, from London, also doing Four Seasons Baku and another luxury hotel, Four Seasons Doha.  Who-he, Blue Sky?  Turns out to be a long-time friend Henry Chebaane, who honed many of his skills as f&b at London Gatwick Hilton. 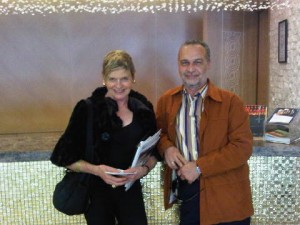 My new friend Azer Garibov, Azerbaijan’s top travel writer, tells me that rich Azeris favour Hilton, and Kempinski, and Shangri-La, when going on holiday.  They like luxury, hotels and destinations.  They eschew Europe, because of visa challenges, and they used to head for Dubai or Istanbul.

Now, since the launch of Qatar Airways’ flights, they go via Doha to Pattaya, Phuket and anywhere in Malaysia or Sri Lanka.  She, Mrs Azeri, high heels and all, makes all the decisions.  He, Mr Azeri, fat wallet and more, pays.