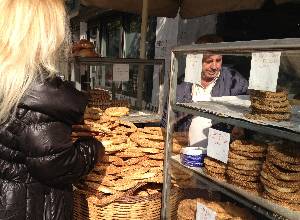 Koulouri sellers are on many street corners

In between all that eatin’ n’ drinkin’ in the luxury hotel that is the GB – the Grande Bretagne, in central Athens – in between all those lovely meals, let us do some more wandering in the local streets

First thing the gal comes to is a bread stall. Koulouri crisp bread is known by a variety of names, simit in Turkey, gevrek in Bulgaria, covrig in Romania and so on.

A recipe for the Greek version uses plain flour, yeast, water, olive oil, honey and salt, and for the topping, sesame seeds and honey. 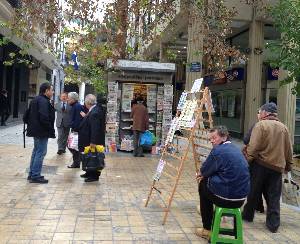 Lottery tickets are on sale in many places

Nearby are people selling tickets for the lottery, established in 1958 when OPAP, the Greek Organization of Football Prognostics, was established to set up a lottery system  – proceeds support many charities, favouring any with sport connections.

Even with the current financial situation, the payout typically runs between two and six million euros. You walk around, have a flutter on the lottery, buy something from a newsstand, have your shoes cleaned, sit down for a coffee. 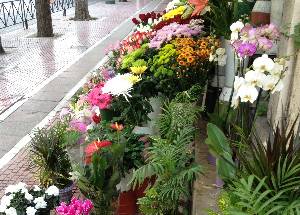 A few yards up Vas Sofias Avenue from Syntagma, on the right side of the street as you walk east, are 11 booths set deep into the side wall.

Dark green wood shutters will open, early in the morning, to reveal masses of supplies of fresh flowers that are then brought out on to the sidewalk pavement.  The aroma of the various blooms makes you feel good, as you walk by.

Perhaps you head on to Attica, the best-known central department store, or you stroll round the local streets, including the pedestrian-only Ermu. 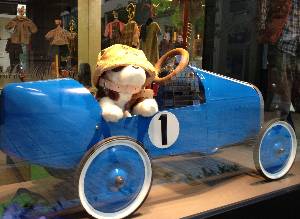 Toys for boys and..

I took a simple walk, seven minutes from the GB, to get to Voukourestiou, named after the 1913 treaty that ended the second Balkan war. Here you find the famous Zonar’s – Le Café d’Athènes, where all the gossip that is not being shared in the GB’s own Winter Garden takes place.

This is certainly one of the most chic streets around. Some of the window displays, like this animal in a toy car, make you smile.   Some buy worry-beads when they come to Athens, but they always have so that is no sign of current times.

The first time I came I stocked up with tights (pantyhose), enough for the next century as they were a quarter of the price of anywhere else in the world. 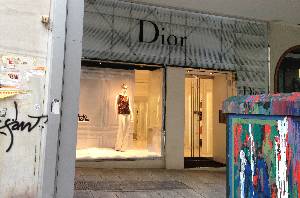 .. for gal (the Dior store has interesting external art)

Voukourestiou’s list of brands is amazing – Baccarat, Bally, Bulgari, Burberry, Cartier, Chopard… and we are still only up to C.  The list continues right through to Zegna.

Are people shopping?  Well, you could say the same thing about luxury stores anywhere.  Look in through the window and you see a security guard, be it in London’s Bond Street or New York’s Fifth Avenue, but there will not be hordes of American Express-toting fanatics intent on buying anything they can.

The exception, of course, is Louis Vuitton on Paris’ Champs-Elysées, where Chinese have to be limited in the number of handbags they can buy.   The only difference here is that some of the stores’ exteriors have nearby ‘decorations’ in the form of graffiti. 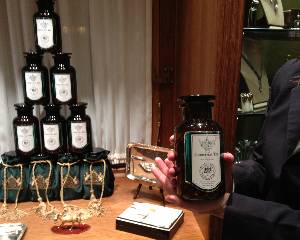 Display of Christmas teas at the GB's lovely boutique

For souvenirs that suit anyone, by the way, head back to the lovely GB and its own bijou boutique.  They sell the tall glass-bottle oil and vinegar holders – empty – that make divine memories, back on your own dining table at home.

Their current offerings also include own-label goods introduced this July. There are Greek marmalades (try Bergamot, Plum & Pomegranate), and the honeys you find at breakfast, with tastes of Fir tree, Forest and Orange blossom, and teas.

Buy a box with three tins, one each of Mastiha, Herbs of Olympus, and Mediterranean green tea.  For a special gift, buy a gold-embroidered green velvet bag holding a 140-gram glass jar of Christmas tea, a blend of white tea, apple, almond, cinammon and beetroot.

My own tea-taster, in the form of My Man, can confirm it is ‘delicious’.  Buy now, online in time for Christmas.