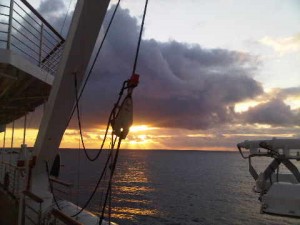 Here we are, gal, in the north of UK, in Shetland – or rather Mainland, the key island of the archipelago that is due west of Bergen, whence the luxury expedition ship Silver Explorer sailed overnight.

Mainland is all of 567 square miles and it has a population of just over 22,000.  There is probably one tree for each hundred people. For each person there are probably a hundred sheep.

They (humans not quadrupeds) speak English with a considerable Scottish and Scandinavian lilt, and some of their words are pretty incomprehensible even to native Brits. 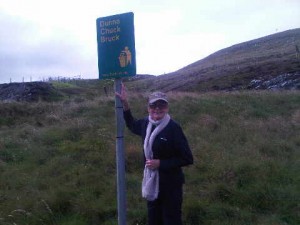 The most important date, apparently, is 1469, when King James I of Scotland married 12-year old Margaret, daughter of the Norse King, a Dane called Christian. The following centuries saw lots of hardship, but since oil was found offshore some 40 years ago the standard of Shetland life has soared.

Houses look well cared for, there are 32 schools, eight indoor swimming pools and two supermarkets (Tesco is open 0700-2300, daily). Cost of living is high, they say, but quality of life is superlative.  There seem to be plenty of planes (FlyBe) coming in and out of Sumburgh Airport. 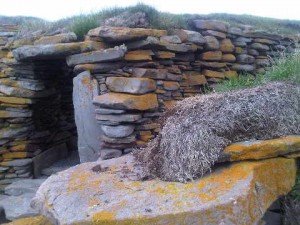 Jarlshof is a multi-century pre-historic settlement...

You know there is all that airlift as the runway goes across the main road to Jarlshof, a ruined settlement that is thought to date back to 2,500 BC.  The Viking specialist on board ship, Dr Colleen Batey, has already explained onboard what we are going to see.

Once we get to the site, she takes us round, showing us how dry-stone walls formed of round-edged stones, perhaps taken from the adjacent beach, were used to form community brochs or towers, and later, wheelhouses, with peripheral cubby-holes that would be lined with furs for warm, one-family dwellings.

By the time Norse settlers came in AD850, houses evolved into long houses, animals one end, and so on.  Today it is mostly topped with grass, with bits of stone showing here and there.  The wind never ceases.  It is freezing, or rather biting. 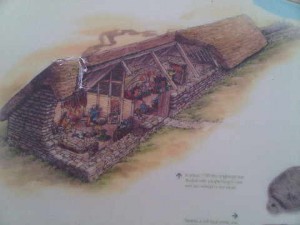 ..but in times of yore its long-house had thatching, and areas for humans and animals

We repair to Sumburgh Hotel, a bleak-looking stone building on a barren headland.  This is not exactly a luxury hotel but it is the only one in the area, and it does serve hot tea, okay strong coffee in thick white cups, and sweet biscuits.

Back on the bus we hear about the festivals that Shetlanders love, to occupy themselves during the long, and mostly dark, winter months.  Every January, the biggest of these festivals is the Up Helly Aa festival, when they ceremonially burn a replica of a Viking ship.  Memories are long in this part of the world. 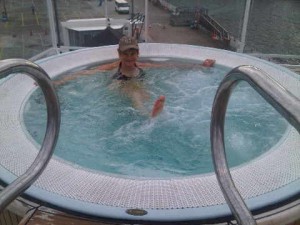 Back on board Silver Explorer, it was a good time to try a jacuzzi

We drive for 45 miles north, along the coast. We pass hundreds of acres of heather-covered bog, some of which is already cut for peat logs, still drying before they are taken to be used in household fireplaces in the even-colder months.

Back on board ship, some of our new friends decide to walk five minutes back on shore, to the centre of Lerwick, to find somewhere to dine – looks like there is a fish and chip shop right nearby (but they end up eating Indian).

We will be staying aboard, for yet more fine dishes from Chef Christian and his merry men.  First, however, it is essential to test one of the ship’s two outside Jacuzzis, to say I have done it, Jacuzzi-ed as far north as is possible, in British waters.