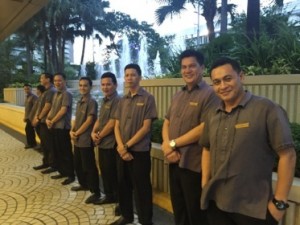 Very soon, like around April 2016, Shangri-La will have not one, not two but THREE luxury hotels in Manila – and as you have been there will realise, traffic is such that you stay near your required location, which puts a completely different meaning to the idea of a ‘staycation‘. In Tokyo that might mean taking a subway to the newest place in town, say Aman Tokyo or Andaz Tokyo Toranomon Hills. In the Philippine capital it is more sensible to say where you want to be and stay near there. The 632-room Edsa Shangri-La Manila ticks lots of boxes, (relatively) easy to get to, amazing medical facilities and retail actually connected to the hotel, and an outdoor oasis of a pool and surround with a multi-faucet all-ages water feature like that of The Ritz-Carlton, Grand Cayman – and lovely welcoming staff. The gal was overwhelmed. 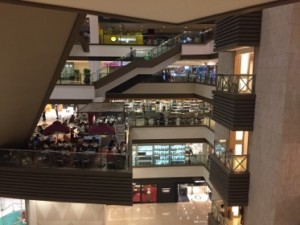 I had expected a multi-use concept, and yes, the shopping was useful rather than highest-end, luxury-label, latest-style brands, which is clever as it makes more money for the operator. (I am writing this at Hong Kong International Airport where I walked the entire terminal for exercise and I can tell you, truthfully, that Bottega Veneta and Gucci and Prada were empty whereas Zara was packed, including long lines at the cashier point.) So retail is clever, here at Edsa Shangri-La, named because it is on Epifanio de los Santos Avenue (EDSA), the limited-access circumferential freeway around Manila built by the Americans in 1940. But the main thing is that this is an urban resort that offers true comfortable luxury. Take HEAT (Healthy Eating Amazing Taste) all-day dining, where at breakfast you get the coffee you must have within two minutes of asking, and Victoria, sensing you cannot find any wholewheat bread to toast, asks how many slices and brings it to you, three minutes later. 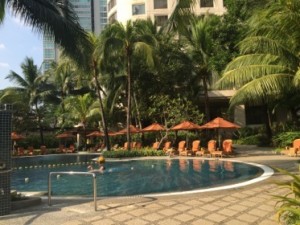 A small corner of the enormous pool oasis

This is the 632-room hotel where self-employed and the less-frenetic foreign business people tend to stay. Some of them choose the Garden Wing, as that is where the really efficient Horizon Club is, indoor-outdoor on the 14th floor – both wings are equidistant to the really-serious 24/7 LifeFitness gym, with its 6.30am OMG spinning classes. One notable feature here is that everyone smiles. They have time to smile. Some will undoubtedly relocate to the next hotel, Shangri-La at The Fort, opening next year in in Bonifacio Grand City, an entirely new ‘village’ masterminded by Ayala. Bonifacio Grand City is pedestrian walkways and tree-lined boulevards, and Apple and Google headquarters, and the hotel has similar HBA interiors to those of Jing’An Shangri-La, Shanghai – but its rectangular pool will not have the oasis feel of the one here, at Edsa Shangri-La. 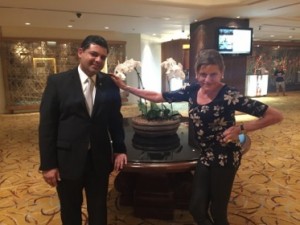 And would any luxury hotel today dare to put in a cosy Italian restaurant, like Edsa Shangri-La’s divine Paparazzi? Yes, Acqualina did, when it opened in Sunny Isles Beach FL (theirs is a leased out restaurant, to the New York-based Il Mulino). Here, Paparazzi, run by cheery chef Marco Ghezzi, is run inhouse and it is brilliant. It is the kind of food that you dream that your mythical Italian grandmother would have made, and every day. I had a whole knotted burrata followed by a whole Dover sole Mugnaia style, with butter and lemon sauce, with spinach of course, and a glass of Antinori La Braccesca Sabazio Vino Rosso di Montepulciano Il Bruciato 2013. Oh I felt so much better, even though these dishes, on the single-sheet printed menu, were not marked as Refuel, health dishes. Who cares? I was with the GM, Amit Oberoi, who is getting ready for the APEC meeting next month. No, dear reader, I will not be in Manila then, sorry.