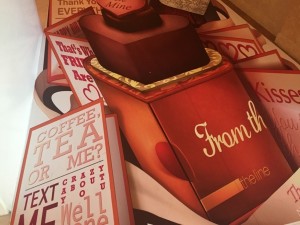 Shangri-La Singapore might be, at the ripe old age of 45, doyenne of this magnificent brand but it is oodles of fun. This, on the floor of its cake shop, is an optical illusion that looks three-dimensional but is flat. It certainly turns the eye, says the gal, to the fabulous cake selection, meant as gifts. The idea is you choose your type of cake. You then choose the label to be stuck on top – Happy Birthday, or I Love You, or one of the other 50 alternatives. Finally you choose the colour box you want. Hey presto, as the big picture above shows, you then have the perfect gift, for anyone, for any occasion. The shop also, by the way, has an excellent selection of quick lunchtime, or anytime, snacks, ideal if you are spending the day lazing around what must be Singapore‘s largest ground-level outdoor pool, by far. 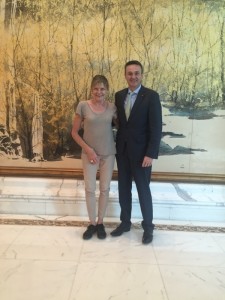 This place is more than a hotel, it is a very agreeable way of life, 15 acres of glorious gardens, three separate blocks of bedrooms, plus ballrooms and an enormous gym and all the other things you could think of, including restaurants. My tip: do not miss Marco De Vincentis‘ fabulous Neapolitan cooking at Waterfall, where Sandy Lee makes you feel perfectly at home before offering tastings of two wines before letting you know that her favourite is Tormaresca Puglia 2013 Neprica, which did actually go extremely well with burrata Pugliese with tomatoes, and spaghetti aglio, olio and pepperoncino, just right before what was to be a 13-hour flight home. Another tip: it is well worth choosing the Valley Wing, which has only 131 bedrooms and runs as one big ‘club experience‘. Yes, there are mammoth lobby paintings, a Shangri-La norm, and lots of traditional style. 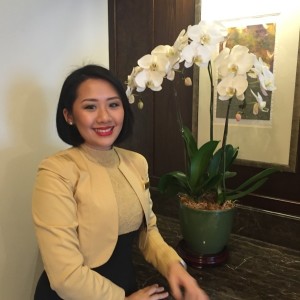 You are welcomed at Valley Wing by a guest relations person who not only looks charming but, in my case, was a tech wizard. My Mozilla Firefox had died on me in Yangon (that was pure coincidence, nothing to do where I was). For days I had to rely on Safari. I asked Sherie Han if she could get me an IT person. Can I help, she asked.   I explained what had happened. She immediately called an outside provider and, fully 20 minutes later, after she had worked my laptop at lightning speed, she had resuscitated, Lazarus-like, the dead Firefox. Now what else can I do, she asked. I was so happy I felt like rushing downstairs to the Valley Wing‘s ground floor lobby, an all-day club with open bar and as much Perrier-Jouët, in Perrier-Jouët glasses, as you want, say with your afternoon tea, its edibles in a cute three-tiered stand. 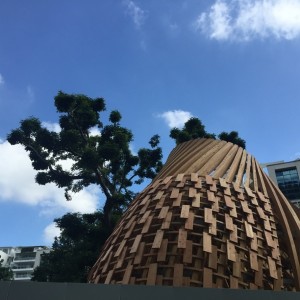 It is really an education staying in this hotel-within-a-hotel. I learned about orchids. Arrivals are given a single green bloom, in a box, with all technical details. This is Dendrobium by Shangri-La Singapore, a long-lasting speciality orchid named for the golden sunsets of Palolo Valley, Oahu, and created in 2006 for the hotel’s 35th birthday. Its mother (seed) plant is Palolo Sunshine and its father (pollen) plant, is Dendrobium Pink Spider, itself a hybrid of Dendrobium Black Spider and Dendrobium Lucian Pink. Oh, and more education. Next time I come back here the hotel’s orchid house, visible from the terrace of the Valley Wing, will be operating. Franklin Po, of Tierra Design, is creating this bespoke wooden sculpture, which will be alive with masses of orchids – there are already orchids on many of the trunks of trees in the grounds but this orchid house promises to be another unique feature in Singapore.