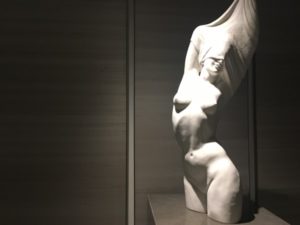 The thing about St Regis, any St Regis, is that there are recognisable differentiators. There is invariably a local take on the Bloody Mary – at Shanghai’s newest luxury hotel, St Regis Shanghai Jingan it is a Mary Jing, which uses dried figs and osmanthus flowers. There is a connection with polo, and with jewellery – some properties work with Tiffany but this particular property associates itself with Chinese jewellery designer Bao Bao Wan, above. And throughout the hotel there will be ornate chandeliers and art, including statues. The owner of this 480-room hotel knew exactly what he wanted from day one, when he bought what was a nearly-finished Sofitel. First, he wanted it to be St Regis, so the interior was more or less completely ripped out, to start afresh. 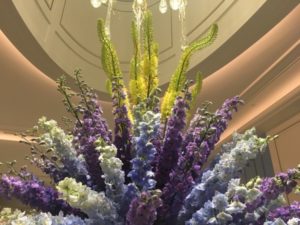 The owner is a fan of Dale Chihuly, the Seattle glass artist, the genius who has so prominently decorated two end walls, one green and one yellow, at Ritz-Carlton Millenia Singapore. Here there are collages on walls – one, at the rear of the lobby, is decorated with orange blown-glass flowers similar to those on the lobby ceiling at Bellagio in Las Vegas. There are also, here, Chihuly pieces that I have not seen before, two-dimensional wall-set glass compilations that can be illuminated. Balance all this permanent art with fresh flower arrangements and you get an idea of what St Regis Shanghai Jingan is about, though it may be a bit worrying, when it comes to filling the beds, that the well-established Portman Ritz-Carlton, now a sibling in the extended Marriott family, is only 12 minutes walk away. 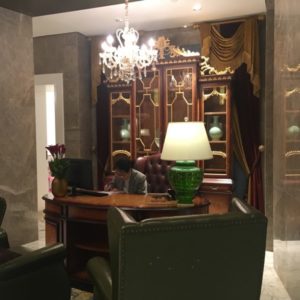 One of five semi-private check-in desks

Actually, come to think of it, not everyone is going to walk in this city. Pedestrians are now supposedly regimented, with traffic lights that have long wait times. The side-streets in the Jingan area are more than slightly hazardous as delivery guys charge along the pavements on baby-sized motor scooters and the litter of drop-anywhere rental bikes adds another ingredient to an omnipresent obstacle course.  St Regis Shanghai Jingan, which has a superb Iridium Spa – Yoyo, from Chengdu, is a first-class therapist – and a bar for those Mary Jings, and afternoon teas in the lobby followed by the company-signature sundowner sabreing, here of Veuve Clicquot, is a hotel that is intentionally aimed at the growing domestic leisure market. GM Chris Tsoi, who lives in the hotel’s residences, says he prefers to ask one of his sommeliers to do the sabre act (he does manage it about 30 percent of the time but that is not good enough for this perfectionist!). Ceremonies, and experiences, are what cool Chinese, especially the increasingly important Millennials, really like. 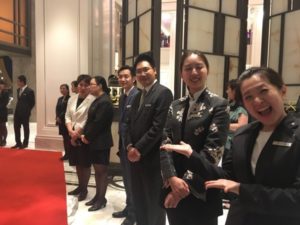 Every year the influential Hurun Report, produced in Shanghai by the team headed by the very-English pundit on Chinese wealth Rupert Hoogewerf, shares the trends it sees. The 2017 report, published June 5th, 2017, shows that increasingly the 3.8 million (sic) dollar millionaires in this amazing country are prepared to spend in luxury hotels. In days past stories abounded of rich men staying in doss-house commodity lodging and spending quarter of a million on a Rolex. Now they may well turn left when boarding a plane – of course they could even be in their own private planes – and they stay in five star hotels. Some expect the red carpet treatment, and when they do not get it they are, apparently, even more vocal than their western counterparts. Jewellery designer Bao Bao Wan, by the way, experienced red carpet treatment in a grand way: the Beijing-born grand-daughter of one-time Chairman of the National People’s Congress Wan Li was the first Chinese girl to be presented at the annual Bal des Debutantes in Paris. NOW SEE SUITE 5602, BELOW