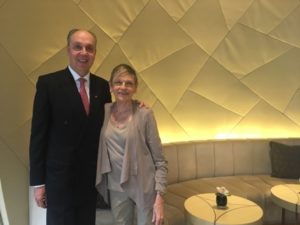 Shanghai, frankly, is awash with luxury hotels, and looking at it from the operators’ viewpoint they all share common challenges. One is regulatory uncertainties with internet connectivity (although Shanghai does not appear to be quite as strict as Beijing or Tianjin). Another is finding and keeping staff. When these hotels opened, a few years ago, there were thousands of applicants, mostly non-English speakers but keen for jobs. Now there are more hotels, a lot of other job-opportunities, and the single-child policy (although now eased) means fewer potential workers in hotels, anywhere. The luxury Mandarin Oriental Pudong, Shanghai, has a brand new GM, Clemens Hoerth, and the talent issue naturally came up in conversation with the gal – interestingly, this is a would-be surgeon who diverted to the hotel world because he thought it would be less hard work. Little did he know. 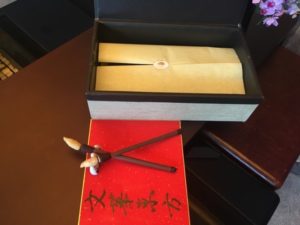 His people skills would honestly have been wasted had he spent his life cutting into bodies of people anaesthetised, and unable to talk. Instead, he is a magnificent raconteur who makes guests of the 36-room hotel feel really at home. If an email address of a just-checked-out (no, not ‘departed’, in the death sense) customer is known, he personally contacts that guest, straight afterwards, to ask how it all went. This way, he says, he gets a much better return than a standard ‘how did we do?’ generic questionnaire, which I, and I am sure the majority of busy travellers, really hate. Herr Hoerth, from his first days as a pageboy at the Vier Jahreszeiten in Munich, knows that busy people are just that, busy, but personalisation is the best way of getting through to them. 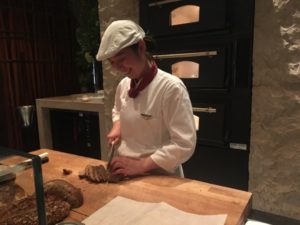 Baking in the restaurant

The hotel’s Presidential Suite is ideal for those who hanker after space – it is 7,800 sq ft in all, of which more than a quarter is terrace, up there by the Mandarin Oriental sign that hangs high over the 25-floor building. Someone had thoughtfully put out a yoga mat and Pilates ball, sculptures that seemed suitably to complement the stone work, greenery, and seating all ready to accommodate a small party of friends or, since this is a top-business hotel, colleagues. Inside, personalisations included a calligraphy set, all edible. But we were eating at Fifty 8° by Richard Ekkebus, a casual grill-type restaurant that is very different from, but just as good as, that Dutchman’s fine dining restaurant at Landmark Mandarin Oriental in Hong Kong. I loved bread being baked here, right in front of us. 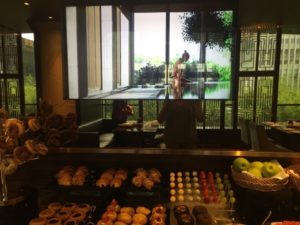 Not all Mandarin Orientals have club lounges but this one does, on the second floor, and thoughtfully, in view of international guests’ body clocks, it is open 24/7. I was breakfasting there at my usual hour and it was intriguing to see a Chinese boy of about ten, with backpack presumably holding school books, rush in and go straight to the buffet to pick up items that he obviously knew, from daily routine. These were put into a paper carry bag and Tiger Mom appeared to carry the bag as the pair left for the school run. They might well have been living in the residences-to-let, stays one month or more, that are a perfect complement to this luxury hotel. As I left I noticed, as last time, a military line of baggage trolleys, each with curlicues to the top shape that turned utilitarian items into art forms. NOW SEE THE PRESIDENTIAL SUITE, BELOW