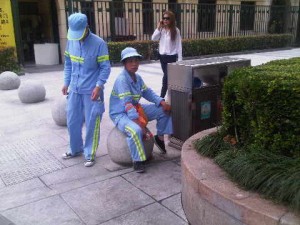 Street cleaners, having removed the most minute speck of dust from Nanjing Road, take a break

Even the street cleaners in Shanghai look good (how do you keep a pale lilac outfit clean?). But then you see older people of both sexes on The Bund, early morning, wearing white silky pyjamas as they do mass Tai Chi. The gal, who travels 300 days a year, dare not travel with white for obvious reasons.

She will, be the way, soon be introducing travel tips into girlahead.  This is, as she is bound to say, by popular demand, and, not wanting to assert too much independence, she will do as they say.

Back at ILTM, for the third and last day of International Luxury Travel Market Asia, she met up with so many young-old friends it was kiss here, kiss there, everyone a kiss-kiss, with a tale to tell.

Listen to Rupert Hoogewerf’s story, for instance.  His Hurun Report has, for the last decade, been monitoring China’s wealthy entrepreneurs. You see him regularly quoted in the Financial Times and other serious publications – anyone wanting to get through to Chinese millionaires. 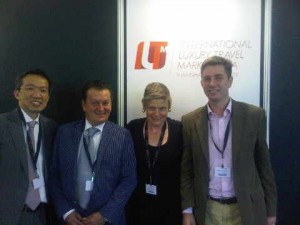 This year, they average 3.2 overseas trips, and whereas top destination last year was USA, for 2012 it is France, followed in turn by USA, Maldives, Italy. They decide the destination by reputation (59 percent) and location (56 percent). Top hotel brand is Shangri-La, followed in order by Hilton, Ritz-Carlton, Grand Hyatt and Peninsula.

Now these super-rich self-made achievers are, says Hoogewerf, moving on to a search for in-depth fulfilment. They are cautiously looking to invest, and are searching for charities. They are into self-education, health and organic living.

They are collecting, be it fine wine or tea – one of his entrepreneurs recently bought half a mountain renowned for its fine tea plantations.  Yes, they love shopping, even for mountains.  At one of Shanghai’s unique luxury hotels, The PuLi, about twice a week a guest telephones the GM beofre checking out to say, love the hotel, I want to buy it (note no price restraint).

When travelling, bragging rights in the form of photos to show back home, are important, hence the appeal of Antarctica, to be photographed with a King Penguin, and Dubai, to be shown in Burj al Arab. They have not yet cottoned on to sailing the Amazon.

The devastatingly good-looking Francesco Galli Zugaro, head of Aqua Expeditions, was making his first trip to Shanghai but he rushed past at Lamborghini speed and it was impossible to photograph him (stick with King Penguins or Burj al Arab…).  He has two luxury 12-cabin floating-hotels on the Amazon that are designed by Peru’s best known designer Jordi Puig, and Ferran Adria of El Bulli fame coordinate his food. I am told the boats are as good as Oberoi’s sensational Zahra on the Nile.  Now, he says, he is planning a third, on the Mekong. 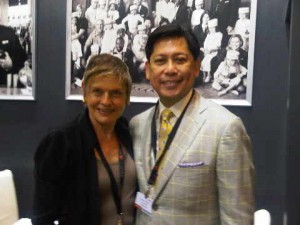 Photo of you, Francesco, next time.  Did get Albert Herrera, caught between sensational bursts of creative wordage as he, the hotels’ guru of the world’s best luxury travel agent consortium, Virtuoso, nipped around the stands at ILTM.  He has himself just been cruising, though not on the Amazon.

Every year Virtuoso has a glorified speed-date in Vegas for its travel professionals (for which read agents) to say hello to member hotels (for which read increasingly-hoarse GMs) in four minutes, or is it six, before they, the hotels, move on to the next professional.   Every year too Virtuoso has a less-frantic world meeting.  This year it took a Regent cruise around the Mediterranean. 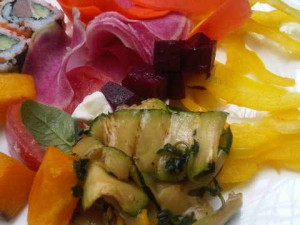 There is always something new.  Just as I am about to leave town I hear about Naked Retreats, eco- hotels started by South African Grant Horsfield and his wife, architect Delphine Yip.  Stay in masses of space, in luxury but eco-built, dine at a community table, make friends.  Eighty percent of guests are achieving young Chinese, fitting into the Hurun category.

It was my friend Gerd Knaust who told me about Naked Retreats – when we first met, Gerd was a chubby chef.  Now he has given up beer (we Germans drink too much of it and we blow up…), and given up red meat and he loves drinking carrot juice to such an extent that his hands look a weeny bit orange.  He is into health, in a big way.

I am lunching with him at his lovely airy Atrium restaurant, in the Shanghai Hilton – celebrating 25 years next year.  The first chef here, Peter Knipp, with his assistant Josef Paier, cycled around the ‘town’ that was Shanghai then trying to find food suppliers.

My first visit here, I wanted to meet a young Chinese hotelier, was introduced to young Justin Guo, trained as a nuclear engineer but he knew he would be a septuagenarian before reaching the top so, to assert his independence, he switched to hotels.  Now he is running his own hotel. 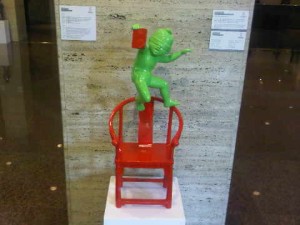 Having It My Way by Xie Ke

Now the lobby of this busy-as-always 714-room Shanghai Hilton hotel, which works closely with Formula One and many sports, itself sports an exhibition of enigmatic sculptures by Xie Ke, a Hong Kong-born artist who now lives in Beijing.  Love his Having It My Way, a typical story-telling sculpture.

A bright green figure, holding a book, stands on the back of a red Ming chair.  This shows the elegance and tradition of the chair, and the boy wants to continue the tradition that is Chinese heritage, but, but standing on the chair back, he is showing he also wants to assert his independence.