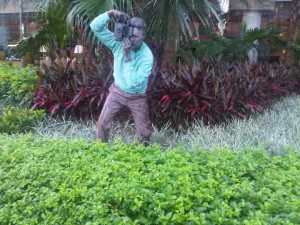 Photographer at the top of Pacific Place, Hong Kong

There is someone else taking photos at the top of Pacific Place – the mixed-use development above Admiralty, in Hong Kong island’s central sector.

The hotels that rise up out of the shops and offices down below could be called the three sisters, a trio of luxury hotels, The Conrad, Island Shangri-La and, with the luxury Upper House sandwiched into its main bulk, the J.W.Marriott.

Between the Conrad and the Island Shangri-La, above ground with the British Consulate just across Supreme Court Road, is a pleasant little Pacific Place-owned park, and here are lifesize sculptures by J. Seward Johnson, whom the gal has always liked since she saw his work in the gardens of Four Seasons Dublin. 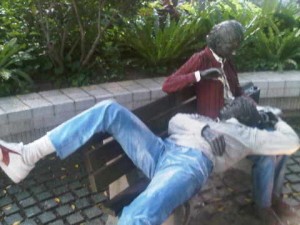 What a fascinating life this guy has had.  Real name John Seward Johnson II, he is part of the Johnson & Johnson family (grandfather Robert Wood Johnson started the company) and Michael Douglas is a first cousin.

He was born in 1930, went to a school for dyslexics before temporarily studying poultry husbandry at the University of Maine.  After four years’ naval duty during the Korean War he joined the family company, but his uncle Robert Wood Johnson II fired him in 1962.  He turned first to painting, and then to the trompe l’oeil sculptures for which he is famous. 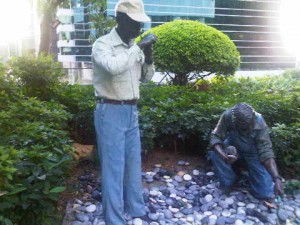 He is a real philanthropist.  He turned the former New Jersey Fairgrounds in Hamilton NJ into Grounds for Sculpture, now a nonprofit organisation that is a popular wedding venue.

He is also, as so often happens in wealthy dynasties, still involved in a fractious soap opera with his Polish-born stepmother, Barbara Piasecka (Basia), once a housemaid, who claims the Seward Johnson (senior) in 1983 was in his right mind when he made a will leaving everything to her, including the Florida oceanographic institute he co-founded.

The old man died three weeks later.  His executor, incidentally, was lawyer Nina Zagat – yes, of THE Zagat, wife of self-appointed foodie commentator Tim Zagat – who according to People magazine stood to make over $6 million in legal fees out of the case, but it was settled out of court, leaving the Basia with so much money she moved to Monte Carlo for safety. 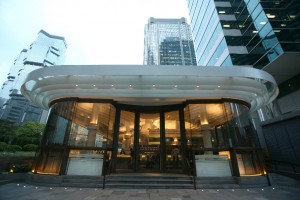 But there are other features in this area-atop-Pacific Place.   Domani currently heads TripAdvisor’s list of Hong Kong’s 3,367 listed restaurants.  It is part of El Grande Holdings, which has 14 bars and restaurants in town.  People love it because it does not feel like a city place.

You look out into gorgeous greenery – you can eat out there if you want.  The manager, Stefano Bassanese, runs the place as if it is your corner café. 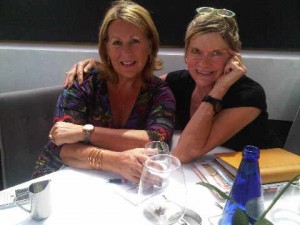 Super-vivacious Ms F has just been named Business Leader of the Year at SKAL International Hong Kong’s annual Celebrating Women in Business awards).  Domani is her canteen and, like other regulars, she never asks for the menu.

Stefano chooses for her. That day, eating from the menu, lunch started with a Burrata and tomato salad – it was to be a burrata day, but who cares?

At dinner it was Burrata wrapped in prosciutto, watching the sun set through the picture windows of Nicholini’s in The Conrad. 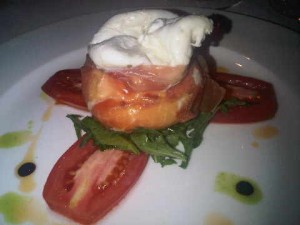 Newly-arrived chef Alex Bignotti, whom I had met at the bizarre opening of the Marden Palace, Antalya, came by to say hello, and sent out a heavenly taster of beef carpaccio marinated in lemon oil (memories of the limoncello days of the Amalfi Coast, seems so long ago).

The sommelier Leo Lai came by to explain the Masi Coastasera Amerone 2007 he had chosen – a blend of Corvina, Molinara and Rondinella grapes, apparently.  Came by, of course, is momentary. Someone comes by and then leaves.

Fortunately, Thomas Hoeborn, sitting the other side of the table, came – and stayed.  We talked about Abuja, where he opened the Hilton in Poisonwood Bible circumstances (as in Barbara Kingsolver‘s bestelling 1998 novel, take in everything you might possibly need), got married in Guam and, after running Colombo and Tokyo and Bangkok for Hilton, now he is here, back to one hotel, the luxury Conrad Hong Kong, and he is STAYING PUT.  It was the gal who had to leave..